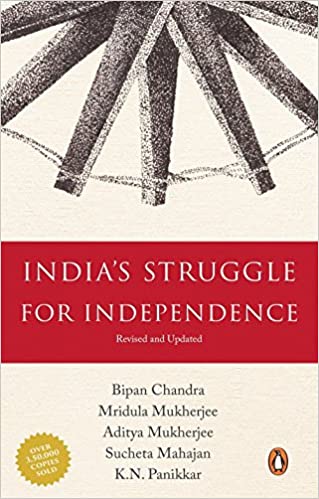 India’s struggle for Independence by Bipin Chandra is your go to book for an in-depth and detailed overview on Indian independence movement . Indian freedom struggle is one of the most important parts of its history.

A lot has been written and said about it, but there still remains a gap. Rarely do we get to hear accounts of the independence from the entire country and not just one region at one place. This book fits in perfectly in this gap and also provides a narration on the impact this movement had on the people. Bipin Chandra’s book is a well-documented history of India’s freedom struggle against the British rule. It is one of the most accurate books which have been painstakingly written after thorough research based on legal and valid verbal and written sources. It maps the first war of independence that started with Mangal Pandey’s mutiny and witnessed the gallant effort of Sri Rani Laxmi Bai. Many of the pages of this book are dedicated to Mahatma Gandhi’s non-cooperation and the civil disobedience movements. It contains detailed description of Subash Chandra Bose’s weapon heavy tactics and his charisma. This book includes all the independence movements and fights, irrespective of their size and impact, covering India in its entirety. Although these movements varied in means and ideas, but they shared a common goal of independence. This book contains oral and written narratives from different parts of the country, making this book historically rich and diverse. The book captures the evolution of Indian independence struggle in full detail and leaves no chapter of this story untouched. This book is a good read for the students of Indian modern history and especially for students who are preparing for UPSC examination and have taken History as their subject.