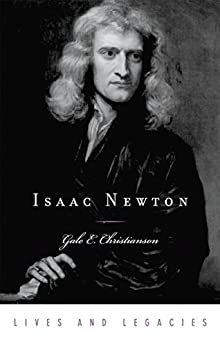 Quarrelsome and quirky, a disheveled recluse who ate little, slept less, and yet had an iron constitution, Isaac Newton rose from a virtually illiterate family to become one of the towering intellects of science. Now, in this fast-paced, colorful biography, Gale E. Christianson paints an engaging portrait of Newton and the times in which he lived.

We follow Newton from his childhood in rural England to his student days at Cambridge, where he devoured the works of Copernicus, Kepler, and Galileo, and taught himself mathematics. There ensued two miraculous years at home in Woolsthorpe Manor, where he fled when plague threatened Cambridge, a remarkably fertile period when Newton formulated his theory of gravity, a new theory of light, and calculus–all by his twenty-fourth birthday.

Christianson describes Newton’s creation of the first working model of the reflecting telescope, which brought him to the attention of the Royal Society, and he illuminates the eighteen months of intense labor that resulted in his Principia, arguably the most important scientific work ever published. The book sheds light on Newton’s later life as master of the mint in London, where he managed to convict and hang the arch-criminal William Chaloner (a remarkable turn for a once reclusive scholar), and his presidency of the Royal Society, which he turned from a dilettante’s club into an eminent scientific organization.

Christianson also explores Newton’s less savory side, including his long, bitter feud with Robert Hooke and the underhanded way that Newton established his priority in the invention of calculus and tarnished Liebniz’s reputation. Newton was an authentic genius with all too human faults. This book captures both sides of this truly extraordinary man.