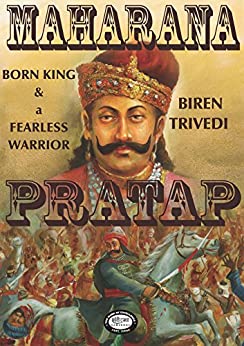 Maharana Pratap was a warrior. He fought battles and struggled all his life to preserve his self-respect. Perhaps, that could be the reason we have always seen Maharana Pratap in battle armour. That one famous portrait of his in battle armour which we usually see was painted by the celebrated Indian Painter Raja Ravi Verma.

The pure royal qualities such as dignity, self-respect, fighting spirit and rock solid determination to struggle for life on oath empower Maharana Pratap’s personality. These royal qualities suggest that Maharana Pratap was a born ruler, a King forever. Therefore for the first time in India Maharana Pratap is portrayed on a cover page of his biographical story-book in royal attire with a royal crown on his head. This is something different and there’s originality in this idea. In this portrait the face of Maharana Pratap is referred from his statue that stands at Udaypur and the royal crown or turban is painted by referring the photograph of Shri Arvindsinghji Mewad, the presently direct descendent of Maharana Pratap. Therefore in this portrait on title page the dignity and self-respect of Maharana Pratap, the medieval hero who waged a relentless struggle for honour against the mighty Akbar is captured beautifully on his face.

Maharana Pratap was a born ruler and the battle of Haldighati was a significant milestone in his life. Therefore on the cover page of the book along with the portrayal of Maharana Pratap in a royal attire with the royal crown the design of sand texture is also laid from the actual photograph of Haldighati.

The story in this book is scripted just the way a bard traditionally delivers an animated verbal presentation of a story to a live audience. Therefore, when you read this story you will not feel that you are reading from a book but on the contrary you will feel that you are listening to some bard narrating a historical story.