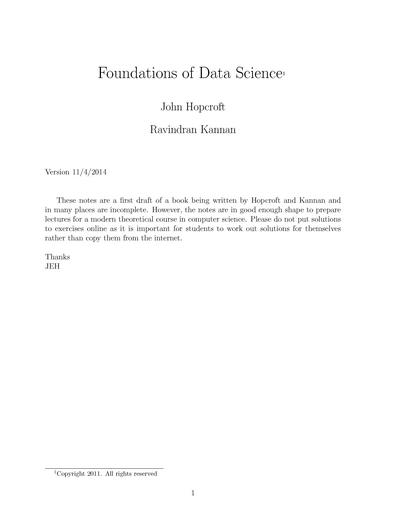 This book provides an introduction to the mathematical and algorithmic foundations of data science, including machine learning, high-dimensional geometry, and analysis of large networks. Topics include the counterintuitive nature of data in high dimensions, important linear algebraic techniques such as singular value decomposition, the theory of random walks and Markov chains, the fundamentals of and important algorithms for machine learning, algorithms and analysis for clustering, probabilistic models for large networks, representation learning including topic modelling and non-negative matrix factorization, wavelets and compressed sensing. Important probabilistic techniques are developed including the law of large numbers, tail inequalities, analysis of random projections, generalization guarantees in machine learning, and moment methods for analysis of phase transitions in large random graphs. Additionally, important structural and complexity measures are discussed such as matrix norms and VC-dimension. This book is suitable for both undergraduate and graduate courses in the design and analysis of algorithms for data.

Computer science as an academic discipline began in the 60’s. Emphasis was on programming languages, compilers, operating systems, and the mathematical theory that supported these areas. Courses in theoretical computer science covered finite automata, regular expressions, context free languages, and computability. In the 70’s, algorithms was added as an important component of theory. The emphasis was on making computers useful. Today, a fundamental change is taking place and the focus is more on applications. There are many reasons for this change. The merging of computing and communications has played an important role. The enhanced ability to observe, collect and store data in the natural sciences, in commerce, and in other fields calls for a change in our understanding of data and how to handle it in the modern setting. The emergence of the web and social networks, which are by far the largest such structures, presents both opportunities and challenges for theory.

While traditional areas of computer science are still important and highly skilled individuals are needed in these areas, the majority of researchers will be involved with using computers to understand and make usable massive data arising in applications, not just how to make computers useful on specific well-defined problems. With this in mind we have written this book to cover the theory likely to be useful in the next 40 years, just as automata theory, algorithms and related topics gave students an advantage in the last 40 years. One of the major changes is the switch from discrete mathematics to more of an emphasis on probability, statistics, and numerical methods.