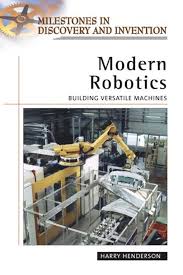 Although true robots are a creation of the second half of the 20th century, the concept of mechanical servants has stirred the human imagination for a much longer period of time. Images of artificial people and automatons range from Golem, the animated clay statue of myth, to Roomba[registered], the robot vacuum cleaner of modern day. Many scientists and inventors contributed to the understanding of robotics and their development in the modern age. Modern Robotics presents succinct biographies of the men and women who were and are the leaders in bringing about this change through research and new technologies. From Jacques de Vaucanson to Grey Walter to Joseph Engelberger, here is a lively introduction to the field through the stories of its top trailblazers.

Series: Milestones in Discovery and Invention