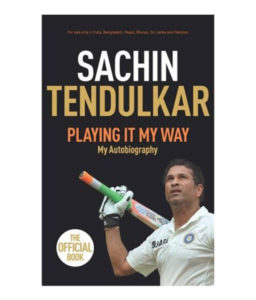 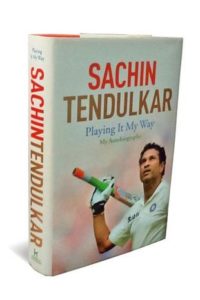 Authors: Sachin Tendulkar, Boria Majumdar
Genre: Autobiography
Page count: 486
Country: India
Subject: Autobiography
About the author and book :
During his career of 24 years, Sachin Tendulkar ruled Cricket with his brilliant batting. During his playing days, he talked a lot about the game but spoke seldom about his personal life. Although every detail of Sachin’s life has been recorded and told in all forms courtesy the prolific writers, the personal account of Sachin’s life was never shared. But the legend himself has brought his story to the world in the form of an autobiography called ‘Playing it my way’. It is co-authored by Boria Majumdar . This autobiography became an instant hit among readers and entered the Limca Book of Records for being the best-selling adult hardback across both fiction and non-fiction categories. It is published by Hachette India.
The only criteria Sachin kept in mind during writing this book was to stay honest. Hence this book is not just a story of Sachin’s life but is also a very personal and interesting take on his Cricketing career. It summarizes the entire 24 years of Sachin’s life spent on the Cricket ground and also delights the readers with some personal anecdotes. It also talks about Sachin’s relationship with other players and team staff. Sachin has given descriptive narration of some of the best innings played by him and the stories behind it. For all budding cricketers who want to learn the game, this book is an interesting read for knowing the determination and hard work put up by Sachin.
Thus the book, ‘Playing it my way’ is an interesting and engaging account of the Sachin Tendulkar story and reveals a lot about the legend which Is rarely told in public.

The greatest run-scorer in the history of cricket, Sachin Tendulkar retired in 2013 after an astonishing 24 years at the top. The most celebrated Indian cricketer of all time, he received the Bharat Ratna Award – India’s highest civilian honour – on the day of his retirement. Now Sachin Tendulkar tells his own remarkable story – from his first Test cap at the age of 16 to his 100th international century and the emotional final farewell that brought his country to a standstill.

When a boisterous Mumbai youngster’s excess energies were channelled into cricket, the result was record-breaking schoolboy batting exploits that launched the career of a cricketing phenomenon. Before long Sachin Tendulkar was the cornerstone of India’s batting line-up, his every move watched by a cricket-mad nation’s devoted followers.