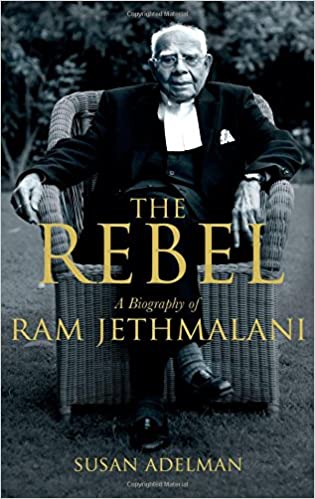 The Rebel: A Biography of Ram Jethmalani By Susan Adelman

The Rebel: A Biography of Ram Jethmalani is biography book by Susan Adelman, published in 2014.

Ram Jethmalani has been called many things a legal legend, a wizard of the law and a magnet for controversy with a knack for defending the most notorious figures in India. With a career spanning the entire history of independent India and still going strong, he has managed to command respect and evoke anger in equal measure. But did you know that he is the most pro-Israel politician in Asia one of the founders of the prestigious National School of Law, Bangalore one of the first to raise the issue of corruption in India, founder of the Sunday Guardian in the late eighties, one of the longest-serving parliamentarians and that he is married to two wives at the same time? In The Rebel, A Biography of Ram Jethmalani, Susan Adelman, a longtime friend, presents the most updated, authentic and detailed account of his life. Peppered with personal accounts, unknown facets of his life and insider titbits, the book reveals the man behind the larger than life persona of Ram Jethmalani.