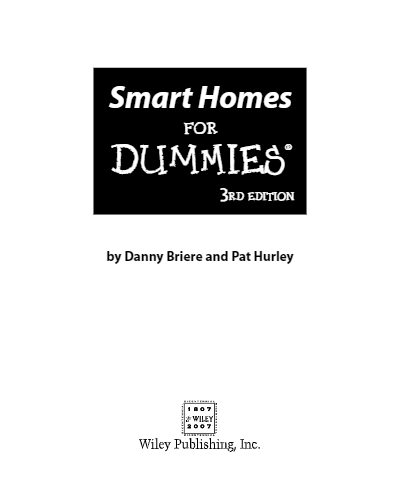 Danny Briere founded TeleChoice, Inc., a telecommunications consulting company, in 1985 and now serves as CEO of the company.

He is frequently quoted by leading publications on telecommunications and technology topics and can often be seen on major TV networks, providing analysis on the latest communications news and breakthroughs.

Danny splits his time between Mansfield Center, Connecticut, and his island home on Great Diamond Island, Maine, with his wife and four children.

Part IV: Livin’ Off the Fat of the LAN

Part VI: Putting It All Together — Home Automation and Control

Part VII: The Part of Tens

Welcome to Smart Homes For Dummies, 3rd Edition. This book is the first to specifically tell you how to futureproof your home to take advantage of the present and upcoming gee-whiz things that can make your home a 21st-century castle.

Very few things can prepare you for the massive changes that are taking place due to the innovations offered by an interconnected world.

The Internet and electronic commerce are changing the way we live, the way we work, and the way we play. (We hope there’s more of the last one!) We’re so used to going to stores and buying things. To calling toll-free numbers so we can ask questions and order products.

To go to school to learn. To going to the movies to watch the latest Harry Potter release. To going to the music store to buy top-of-the-charts CDs. Now it can all come to us. We can buy things through our TV sets.

We can ask questions and videoconference through our computers. We can attend classes through computer-based training. We can click our remote controls to get video-on-demand. We can download new CDs, live, over the Internet. It’s at our doorstep.

The question is, “Can you let it in?” Without a home network, all this might stay outside, or in the TV room, or trapped in that attic office of yours. A home network opens the world to your entire household, and now more than ever is the time to plan.

That’s what Smart Homes For Dummies, 3rd Edition, provides — a plan for your networked future. If you plan nothing and simply go with the flow, ordering new capabilities from your cable or telephone company when available, you’ll find that they’ll start deciding how your home network should be built and operated.

This is dangerous because they will not think about what’s best for your home — rather, they’ll install whatever gets their technicians in and out of your home the fastest.

These companies are also not looking at your big picture. In this book, we help you understand how your home can be compatible with what they want, and still keep your vision of a whole-home network too. Read on!