Home Tags The everything guide to calculus i 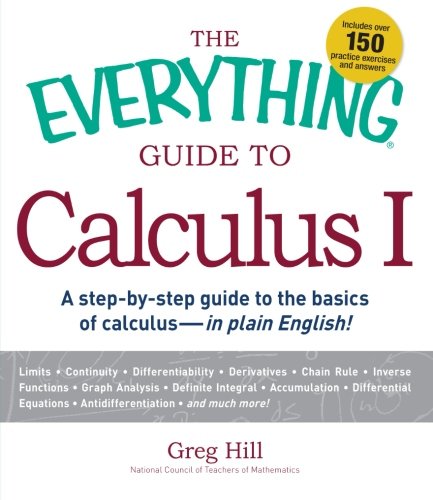 The Everything Guide to Calculus I by Greg Hill

The Everything Guide to Calculus Contents

Introduction to The Everything Guide to Calculus PDF

For decades, calculus has struck fear into the hearts of countless high school seniors and first-year college students.

The mere thought of mastering the mysteries of the subject has caused far too many people to give up before they even get started. But for those who gain an understanding of it, calculus is a beautiful integration (no pun intended) of all the math topics that lead up to it.

Calculus uses arithmetic, algebra, geometry, and trigonometry to develop new and fascinating ideas. The most important thing to do as you work through this book is to really believe that you can learn calculus. Its reputation as an unconquerable mountain is totally undeserved.

Centuries ago, the mathematicians Isaac Newton, Gottfried Leibniz, Leonhard Euler, and others worked to develop the ideas of calculus in an attempt to study and understand the world around them. At its most basic, calculus is the mathematics of change.

These mathematicians realized that by thinking in terms of infinitely small increments, they could better understand ideas of limits, rates of change, and even areas and volumes of irregularly shaped regions and objects.

Today, calculus is a vital element in the foundation of many practical fields, such as engineering, biological sciences, medical studies, economics, and even the automobile and film industries.

People in these professions are not necessarily sitting down at their desks and working calculus problems. It is more likely that the tools they use, particularly computer programs, have calculus processes at their core.

Those tools are used to achieve an end or produce a result, and without the help of calculus, the tasks would be significantly more difficult and sometimes even impossible.

This book is intended to remove the mystery of learning calculus. You will see how calculus utilizes many of the foundational ideas introduced in earlier courses of study to develop new ideas.

You will also discover that taken in small steps and developed gradually, the big ideas of calculus are very accessible. It is not the evil monster many people make it out to be.

The book will give the subject relevance by helping you understand how the calculus concept of measuring and exploring summations of infinitely small change shed light on what is happening at any instant, what has happened in the past, and what may happen in the near future.

Currently, global warming is a major concern for environmentalists. Scientists are constantly studying changes in the Earth’s temperature.

Those changes are examined over short intervals to establish current rates of change, and they are studied over longer intervals to get a picture of the long-term impact of the phenomenon. Although it is cloaked here in environmental science, this is the essence of calculus: the study of change. Ironically, calculus itself continues to change in certain respects.

The capabilities of computers and calculators have opened new pathways to understanding the ideas of calculus. Graphing calculators and computer algebra systems reduce some of the challenges that students faced in past decades.

Geometry software programs make possible the dynamic visualization of many calculus concepts. Used properly as tools of study, these newer technologies can reduce the mechanical obstacles and sharpen the focus on the big ideas of the course.

The Top 10 Ways to Be Successful in Calculus