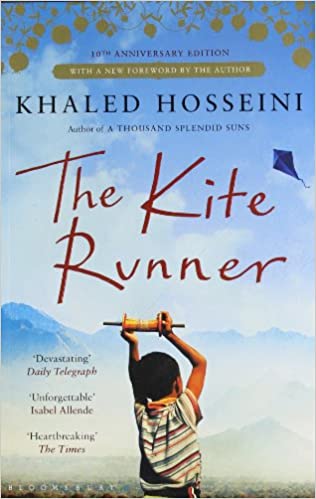 The Kite Runner By Khaled Hosseini

The Kite Runner is the first novel by Afghan-American author Khaled Hosseini. Published in 2003 by Riverhead Books, it tells the story of Amir, a young boy from the Wazir Akbar Khan district of Kabu.

Afghanistan, 1975: Twelve-year-old Amir is desperate to win the local kite-fighting tournament and his loyal friend Hassan promises to help him. But neither of the boys can foresee what will happen to Hassan that afternoon, an event that is to shatter their lives. After the Russians invade and the family is forced to flee to America, Amir realises that one day he must return to Afghanistan under Taliban rule to find the one thing that his new world cannot grant him: redemption.

The timely and critically acclaimed debut novel that’s becoming a word-of-mouth phenomenon. An epic tale of fathers and sons, of friendship and betrayal, that takes us from Afghanistan in the final days of the monarchy to the atrocities of the present. The unforgettable, heartbreaking story of the unlikely friendship between a wealthy boy and the son of his father’s servant, The Kite Runner is a beautifully crafted novel set in a country that is in the process of being destroyed. It is about the power of reading, the price of betrayal, and the possibility of redemption, and it is also about the power of fathers over sons-their love, their sacrifices, their lies. The first Afghan novel to be written in English, The Kite Runner tells a sweeping story of family, love, and friendship against a backdrop of history that has not been told in fiction before, bringing to mind the large canvases of the Russian writers of the nineteenth century. But just as it is old-fashioned in its narration, it is contemporary in its subject-the devastating history of Afghanistan over the last thirty years. As emotionally gripping as it is tender, The Kite Runner is an unusual and powerful debut.