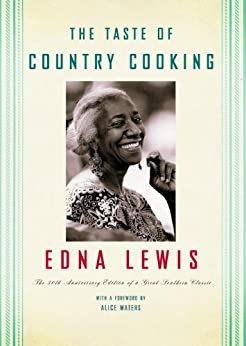 The Taste of Country Cooking By Edna Lewis

In recipes and reminiscences equally delicious, Edna Lewis celebrates the uniquely American country cooking she grew up with some fifty years ago in a small Virginia Piedmont farming community that had been settled by freed slaves. With menus for the four seasons, she shares the ways her family prepared and enjoyed food, savoring the delights of each special time of year:

The harvest of fall a fine dinner of baked country ham, roasted newly dug sweet potatoes, and warm apple pie after a day of corn-shucking . . . the hunting season, with the deliciously “different” taste of game fattened on hickory nuts and persimmons . . . hog-butchering time and the making of sausages and liver pudding . . . and Emancipation Day with its rich and generous thanksgiving dinner.

The scores of recipes for these marvelous dishes are set down in loving detail. We come to understand the values that formed the remarkable woman her love of nature, the pleasure of living with the seasons, the sense of community, the satisfactory feeling that hard work was always rewarded by her mother’s good food. Having made us yearn for all the good meals she describes in her memories of a lost time in America, Edna Lewis shows us precisely how to recover, in our own country or city or suburban kitchens, the taste of the fresh, good, natural country cooking that was so happy a part of her girlhood in Freetown, Virginia.