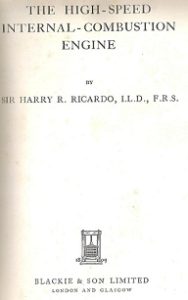 The present volume is a revised and somewhat extended edition of Vol. II of The Internal-Combustion Engine published in 1923.
During the seven years which have elapsed since the above volume was published progress has been considerable; it has, however, for the most part taken the form of improving and consolidating existing orthodox design, and the only important new development which has arisen during this period is the achievement of the high-speed Diesel.
Since progress has, to a large extent, followed along the lines foreshadowed in the original volume, and since also this volume dealt mainly with general principles rather than specific designs, there has been little need for actual revision. The present volume therefore contains additions rather than alterations, and a new chapter has been added dealing with the high-speed Diesel engine.

The High Speed Internal-Combustion Engine is an authoritative book by one of the pioneers of I.C. engine development was last published in 1941, and included work on fuels and developments in mechanical design, in addition to the well-established chapters on diesel and gasoline combustion, and components.