In The Age of Intelligent Machines, inventor and visionary computer scientist Raymond Kurzweil probes the past, present, and future of artificial intelligence, from its earliest philosophical and mathematical roots to tantalizing glimpses of 21st-century machines with superior intelligence and truly prodigious speed and memory. Generously illustrated and easily accessible to the nonspecialist, this book provides the background needed for a full understanding of the enormous scientific potential represented by intelligent machines as well as their equally profound philosophic, economic, and social implications.

Raymond Kurzweil is the founder and chairman of Kurzweil Applied Intelligence and the Kurzweil Reading Machine division of Xerox. He was the principal developer of the first print-to-speech reading machine for the blind and other significant advances in artificial intelligence technology. 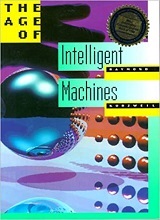 This book explores the past, present and future of artificial intelligence, from its early philosophical and mathematical origins to mesmerizing glimpses of 21st-century machines with intelligence. His superior intelligence, speed and memory are truly amazing.
Widely illustrated and easily accessible to non-specialists, this book provides the foundation needed to fully understand the enormous scientific potential demonstrated by intelligent machines and the their equally profound philosophical, economic and social meanings.
The format is a combination of monograph and anthology with the contribution of 23 essays by artificial intelligence experts such as Daniel Dennett, Douglas Hofstadter and Marvin Minsky, examining contemporary issues in AI create.

Ray Kurzweil is an American inventor and futurist. He is involved in fields such as optical character recognition (OCR), text-to-speech synthesis, speech recognition technology, and electronic keyboard instruments. He has written books on health, artificial intelligence (AI), transhumanism, the technological singularity, and futurism.