Home A Special Books The Bhagavad Gita As It Is 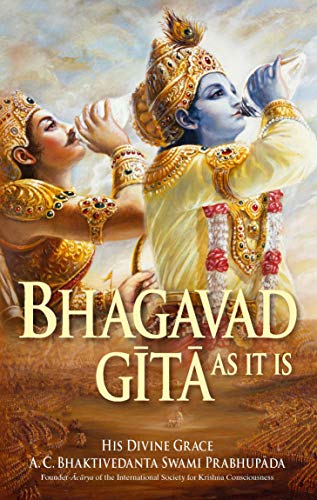 The Bhagavad Gita As It Is By A. C. Bhaktivedanta Swami Prabhupada

The Bhagavad Gita As It Is is the holiest religion book of hinduism translated by A. C. Bhaktivedanta Swami Prabhupada, published in 1968.

The largest-selling edition of the Gita in the Western world, Bhagavad-gita As It Is is more than a book. It is alive with knowledge and devotion; thus it has the power to change your life for the better.

Bhagavad-gita is knowledge of five basic truths and the relationship of each truth to the other: These five truths are Krishna, or God, the individual soul, the material world, action in this world, and time. The Gita lucidly explains the nature of consciousness, the self, and the universe. It is the essence of India’s spiritual wisdom, the answers to questions posed by philosophers for centuries.

In translating the Gita, A. C. Bhaktivedanta Swami Prabhupada has remained loyal to the intended meaning of Krishna’s words, and thus he has unlocked all the secrets of the ancient knowledge of the Gita and placed them before us as an exciting opportunity for self-improvement and spiritual fulfillment. The Gita is a conversation between Krishna and His dear friend Arjuna. At the last moment before entering a battle between brothers and friends, the great warrior Arjuna begins to wonder: Why should he fight? What is the meaning of his life? Where is he going after death? In response, Krishna brings His friend from perplexity to spiritual enlightenment, and each one of us is invited to walk the same path.