Home General Subjects Books Chemistry Books The Chemical Bond II – 100 Years Old and Getting Stronger...
The Chemical Bond II – 100 Years Old and Getting Stronger by D. Michael P. Mingos :: These three volumes of Structure and Bonding celebrate the 100th anniversary of the seminal papers by Lewis and Kossel. These papers, which formed the basis of the current view of the chemical bond, were published independently in 1916 and have greatly influenced the development of theoretical chemistry during the last century. Their essential ideas, which were initially formulated within classical Newtonian framework, have withstood many experimental tests and proved to be sufficiently flexible to incorporate the newer quantum mechanical ideas, which emerged in the 1920s and 1930s. Most importantly, Lewis’ description of the covalent bond provided a graphical notation and a language for experimental chemists, which enabled generations of chemists to constructively discuss and predict the structures of molecules and graphically represent the course of chemical reactions. The Lewis and Kossel descriptions of chemical bonding are cornerstones of the undergraduate curriculum. They have achieved this pre-eminent distinction by evolving and incorporating a flexible view of chemical bonding, based on the symmetry characteristics and radial distribution functions of atomic orbitals. The development of a universally accepted notation for representing the bonds in inorganic and organic molecules has been particularly significant. Spectroscopic and structural results, which emerged as chemistry incorporated quantum mechanical concepts, provided detailed information concerning the structures of molecules not only in the solid state but also in the liquid and gas phases. These have provided increasingly rigorous tests of the bonding models, which emerged from the quantum mechanical description of the chemical bond.
The idea to celebrate this important anniversary in chemical evolution struck a
chord with leading figures in the area of theoretical chemistry and resulted in the submission of 18 chapters, and it became necessary to produce three separate volumes of Structure and Bonding to satisfactorily account for the enormous influence Lewis and Kossel’s seminal ideas had on modern chemistry. Following a historical introduction by myself, Volume 1 contains chapters by Dietar Stalke, Zhenyang Lin, Gernot Frenking, Jean-Francois Halet, Jen-Yves Saillard, Jose´ M. Goicoechea, John McGrady and Michael Hall covering a variety ofexperimental and theoretical studies of topical chemical bonding issues. Examples include the implications of experimentally determined electron densities on Lewis bond structures, the Lewis description of lone pairs in transition metal complexes, dative Lewis bonds, the bonding patterns in large metal clusters and the role of carbonyl ligands in stabilising such clusters and the electronic properties of endohedral metal clusters. Volume 2 starts with a detailed account of Lewis and Kossel’s legacy in defining the bonding in ionic and covalent compounds of main group elements and addresses the thermochemical and bond length implications of the Lewis and Kossel models.
The subsequent chapters by Paul Poppelier, Miroslav Kohout, Sason Shaik, Philippe Hiberty and Bernard Silvi use highly accurate theoretical calculations to address and explore the fundamental nature of the covalent bond. Discussions of quantum chemical topology, the definition of electron pairs in positional space, provide a deeper insight into the nature of the chemical bond and the relevance of the ELF topological approach to the Lewis bond model and the evolution of electron pair bonding in covalent, ionic and charge shift bonds. The Lewis description of the chemical bond was limited to single, double and triple bonds, but in recent years compounds with bond orders greater than three have become commonplace, and the final chapter by Santiago Alvarez compares the electronic characteristics of Cr–Cr quadruple and quintuple bonds. 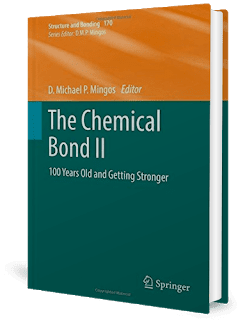 The series Structure and Bonding publishes critical reviews on topics of research concerned with chemical structure and bonding. The scope of the series spans the entire Periodic Table and addresses structure and bonding issues associated with all of the elements. It also focuses attention on new and developing areas of modern structural and theoretical chemistry such as nanostructures, molecular electronics, designed molecular solids, surfaces, metal clusters and supramolecular structures. Physical and spectroscopic techniques used to determine, examine and model structures fall within the purview of Structure and Bonding to the extent that the focus is on the scientific results obtained and not on specialist information concerning the techniques themselves. Issues associated with the development of bonding models and generalizations that illuminate the reactivity pathways and rates of chemical processes are also relevant.
The individual volumes in the series are thematic. The goal of each volume is to give the reader, whether at a university or in industry, a comprehensive overview of an area where new insights are emerging that are of interest to a larger scientific audience. Thus each review within the volume critically surveys one aspect of that topic and places it within the context of the volume as a whole. The most significant developments of the last 5 to 10 years should be presented using selected examples to illustrate the principles discussed. A description of the physical basis of the experimental techniques that have been used to provide the primary data may also be appropriate, if it has not been covered in detail elsewhere. The coverage need not be exhaustive in data, but should rather be conceptual, concentrating on the new principles being developed that will allow the reader, who is not a specialist in the area covered, to understand the data presented. Discussion of possible future research directions in the area is welcomed. Review articles for the individual volumes are invited by the volume editors.

The Chemical Bond II: 100 Years Old and Getting Stronger