Home A Special Books The Complete Persepolis by Marjane Satrapi 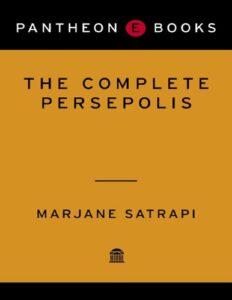 Here, in one volume: Marjane Satrapi’s best-selling, internationally acclaimed graphic memoir. Persepolis is the story of Satrapi’s unforgettable childhood and coming of age within a large and loving family in Tehran during the Islamic Revolution; of the contradictions between private life and public life in a country plagued by political upheaval; of her high school years in Vienna facing the trials of adolescence far from her family; of her homecoming–both sweet and terrible; and, finally, of her self-imposed exile from her beloved homeland. It is the chronicle of a girlhood and adolescence at once outrageous and familiar, a young life entwined with the history of her country yet filled with the universal trials and joys of growing up. Edgy, searingly observant, and candid, often heartbreaking but threaded throughout with raw humor and hard-earned wisdom–Persepolis is a stunning work from one of the most highly regarded, singularly talented graphic artists at work today.

Satrapi grew up in Tehran in a family involved with communist and socialist movements in Iran before the Iranian Revolution. She attended the Lycée Français there and witnessed, as a child, the growing suppression of civil liberties and the everyday-life consequences of Iranian politics, including the fall of the Shah, the early regime of Ruhollah Khomeini, and the first years of the Iran-Iraq War. She experienced an Iraqi air raid and Scud missile attacks on Tehran. Persepolis says one Scud hit the house next to hers, killing her friend and the entire family.

Satrapi’s family is of distant Iranian Azeri ancestry and are descendants of Nasser al-Din Shah, Shah of Persia from 1848 until 1896. Satrapi said, “But you have to know the kings of the Qajar dynasty; they had hundreds of wives.” They had thousands of children.If you multiply these kids by generations, you have, I don’t know, 10-15,000 princes and princesses. There’s nothing extraordinary about that. She added that due to this detail, most Iranian families would be, in the words of Simon Hattenstone of The Guardian, “blue-blooded.”

In 1983, at the age of 14, Satrapi was sent to Vienna, Austria, by her parents to flee the Iranian regime. She attended the Lycée Français de Vienne there. According to her autobiographical graphic novel, Persepolis, she stayed in Vienna through her high school years, staying in friends’ homes, but spent three months living on the streets. After an almost deadly bout of pneumonia, she returned to Iran. She studied visual communication, eventually obtaining a master’s degree from Islamic Azad University in Tehran.

During this time, Satrapi went to numerous illegal parties hosted by her friends, where she met a man named Reza, a veteran of the Iran-Iraq War. She married him at age 21 but divorced roughly three years later. Satrapi then moved to Strasbourg, France.