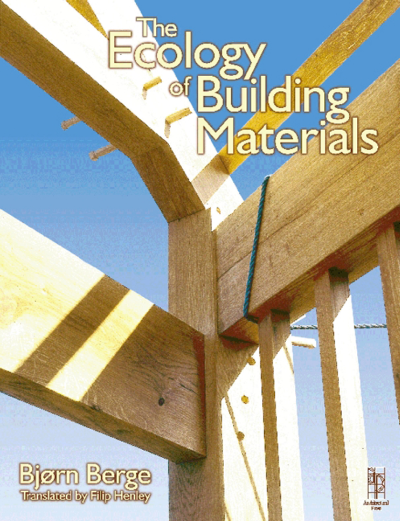 The Ecology of Building Materials by Bjorn Berge

Section 2 The flower, iron, and ocean

Section 3 The construction of a sea-iron flower

Foreword to The Ecology of Building Materials PDF

The Ecology of Building Materials is a seminal contribution to the built environment survival kit. This important reference source has been confined to the Nordic countries for too long and I am delighted to be involved in its introduction to the English-speaking readership.

It is one of a select but growing group of “Tools for Action” towards a sustainable construction industry.

There is a long tradition of books that have been influential catalysts towards a change in attitudes to our human habitat.

I believe, for example, that the 20th-century environmental movement was catapulted into the centre stage by Rachel Carson’s Silent Spring in 1966. It was, however, side-tracked into an obsession with energy issues during the ’70s and ’80s.

It is only since the Rio Summit in ’92 that the epidemic scale losses of natural bio-diversity, and the realization of the criticality of toxicity, in all its forms (including inappropriate and polluting forms or fuel), have led to the re-discovery of our inappropriate relationship with our planet.

I would like to think that this book will have an impact on the building industry as effective as that which Carson had on agriculture.

We have all become aware of the benefits of healthy eating even if we do not practice it as well as we should, but how far has even the awareness of toxicity in buildings penetrated the public’s conscious perception of the places in which they spend 90% of their lives?

Sick Building Syndrome is, however, a generalized catch-all in the mind of the public at large – but it is already the case that they are expecting their environment to be free of risk and they are asking for the industry to sign on the dotted line to that effect.

In such circumstances, the precautionary principle appears to be inevitable and specifying benign a pre-requisite.

Therefore we need the tools to do the job. Understanding the life cycle of the materials we use every day has never been more complicated, and therefore its ready interpretation was never more essential.

As a major consumer of both primary and secondary resources and a major producer of waste, the construction industry has been made well aware of its responsibilities with regard to its enormous potential contribution to sustainable development, and its part in the threat to all human existence if it fails to meet the challenge.

It is important therefore that it acquires the expertise now and not at some unidentified time in the future to lessen its impact. This book is a significant source in the wide range needed for immediate and effective action.

The clear fusion of well-researched fact with experienced opinion in this book is certainly timely and indeed probably overdue since it scores in much more than the strictly numerical sense.

A practicing architect as well as a researcher and author, Bjorn Berge presents a carefully considered view of a whole range of key building materials – from the basis of his own underpinning, technical expertise.

The Life Cycle Analysis research industry is replete with academic and impenetrable LCA scoring systems, which run the gauntlet of seeking to establish mechanisms that will give equal valency to the infinitely measurable and the essentially subjective and almost unmeasurable – usually ending in a three-point scale (good/neutral/bad or plus/zero/minus) that leaves specifiers as confused as if they had not been given the information in the first place; this is especially so when they see products scoring well, which instinctively they consider being very questionable.

Selective or, worse, misinformation is now a significant problem as companies realize the sales pitch benefits of having an environmental profile – whilst the more cynical amongst them regard green issues merely as a marketing opportunity rather than what is becoming more and more clearly, at the very least, a health and safety issue.

The great strength of this book is that it is written in a style that is neither stodgy nor pulling its punches. Bjørn Berge simply states his view on building materials and processes in a way that leaves the reader in no doubt as to what their environmental impact is.

I am reminded of the quotation by Richard Feynman: In technology, it is not enough to have good Public Relations because Nature will not be fooled.

It is particularly refreshing to have a reference source which sifts and evaluates key components and is not then afraid to seek to influence our thinking and give both opinion and guidance. It has taken a while to convert this book into the English-speaking public domain.

Its Norwegian language precursor was published in 1992 and translation has been much more than a straightforward language exercise.

Firstly Bjorn Berge himself has updated and amended much of the original text, then Filip Henley has done a tremendous piece of work in the primary translation from the original Norwegian and I have then sought to contribute a bit of cultural translation, albeit Norway’s building industry – with its long timber tradition – is subject to all the same influences and trends as the rest of Europe, and hence the need for the book in that context in the first instance.