Home A Special Books The Liberal Mind: The Psychological Causes of Political Madness 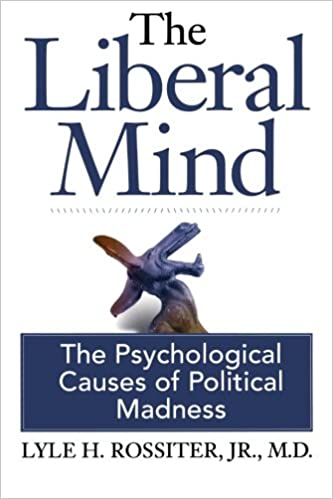 The Liberal Mind: The Psychological Causes of Political Madness By Lyle H. Rossiter

The Liberal Mind is the first in-depth examination of the major political madness of our time: The radical left’s efforts to regulate the people from cradle to grave. To rescue us from our troubled lives, the liberal agenda recommends denial of personal responsibility, encourages self-pity and other-pity, fosters government dependency, promotes sexual indulgence, rationalizes violence, excuses financial obligation, justifies theft, ignores rudeness, prescribes complaining and blaming, denigrates marriage and the family, legalizes all abortion, defies religious and social tradition, declares inequality unjust, and rebels against the duties of citizenship.

Through multiple entitlements to unearned goods, services and social status, the liberal politician promises to ensure everyone’s material welfare, provide for everyone’s healthcare, protect everyone’s self-esteem, correct everyone’s social and political disadvantage, educate every citizen, and eliminate all class distinctions. Radical liberalism thus assaults the foundations of civilized freedom. Given its irrational goals, coercive methods and historical failures, and given its perverse effects on character development, there can be no question of the radical agenda’s madness. Only an irrational agenda would advocate a systematic destruction of the foundations on which ordered liberty depends.

Only an irrational man would want the state to run his life for him rather than create secure conditions in which he can run his own life. Only an irrational agenda would deliberately undermine the citizen’s growth to competence by having the state adopt him. Only irrational thinking would trade individual liberty for government coercion, sacrificing the pride of self-reliance for welfare dependency. Only a madman would look at a community of free people cooperating by choice and see a society of victims exploited by villains. [From The Liberal Mind; The Psychological Causes of Political Madness by Lyle H. Rossiter, Jr., MD]