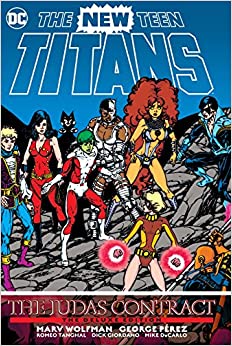 The Teen Titans are a fictional superhero team appearing in American comic books published by DC Comics, frequently in eponymous monthly series. As the group’s name indicates, the members are teenage superheroes, many of whom have acted as sidekicks to DC’s premier superheroes in the Justice League.

The first 8 issues of the groundbreaking 1980s NEW TEEN TITANS now available for the first time in years! When the series launched, writer Marv Wolfman (CRISIS ON INFINITE EARTHS) and artist George Perez (FINAL CRISIS: LEGION OF THREE WORLDS, Avengers) crafted a timeless story starring Robin, Kid Flash, Wonder Girl, Cyborg, Changling, Raven and Starfire – a group of young individuals with great powers and strong personalities who learned their way in the world through the strength of their friendship and the adventures they shared.