Home A Special Books The Octopus: A novel 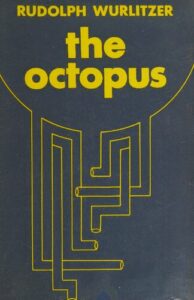 Originally published by Random House in 1969, Nog became a universally revered cult novel and a symbol of the countercultural movement.

In Rudolph Wurlitzer’s signature hypnotic and haunting voice, Nog tells the tale of a man adrift in the American West, armed with nothing more than his own three pencil-thin memories and an octopus in a bathysphere.

This edition of Nog features a new introduction from noted critic and writer Erik Davis (TechGnosis).

Yesterday afternoon a girl walked by the window and stopped for sea shells. I was wrenched out of two months of calm. Nothing more than that, certainly, nothing ecstatic or even interesting, but very silent and even, as those periods have become for me.