Home A Special Books The Perverts 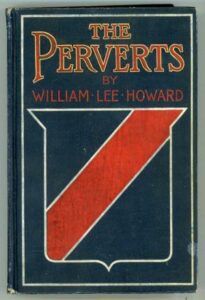 An eccentric novel of ideas written by a Baltimore physician to promote some rather wooly theories about heredity, disease, crime, religion, and morality. The story’s focal point is the Newcomer family of three sisters and a brother, headed, after the father’s death, by the ineffectual mother who is dominated by Mizpra, the youngest sister, a scheming and vindictive virago. Another sister, Marcia, is a drunk and dope fiend who raves in a psychiatric hospital at one point in the story and alternates between religious hysteria and blasphemy. The brother, Leigh (homonymous with the author’s middle name), is the hero, a medical student and zealous scholar who is being cheated out of his inheritance by Mizpra. These two antagonists have their own internal conflicts to deal with as well. Mizpra is torn between the cunning needed to advance her schemes (mainly the control of her mother and the family fortune and her siblings’ lives) and her ultimate driving passion, sadism. ‘She must witness the torture and cause pain. This was her life.’ Leigh is a binge alcoholic with a split personality, one sober, the other drunk. But he struggles successfully to understand and subdue this demonic passion, whereas hers eventually undo Mizpra. The story moves gradually westward, from Europe to New York to Southern California. Mizpra uses the family fortune to ingratiate herself into charitable and religious establishments wherever she goes, even while conducting experiments on animals with poisons in her private laboratories. In Los Angeles, she finances the restoration of a ruined mission and turns the chapel into a secret torture chamber. But her scheme to ruin her brother by hiring a defrocked Jesuit named Bald to lure him into a scandal in New York backfires, and Bald helps Leigh expose Mizpra in flagrante delicto as she is lashing a young Indian girl in her chapel torture chamber. The final scene has Bald strangling Mizpra as they both fall over a cliff into the abyss, lit by lightning. The author traced the perversions of the Newcomer family to the ill-advised mating of their parents when they were too old. Compounding this mistake was their adherence to radical new child-rearing ideas which are partly inspired by the suffragette feminism of the day. Mizpra is unsexed by her education, Leigh coddled and unfitted for business by his. But the author also hates religion. He believes only in Science and would do away with prisons and churches, replacing them with hospitals. However, the calm dispassion of the scientific method is little in evidence in this novel, with its frequent (and annoying) intrusion of blistering authorial asides and its occasional (and amusing) flights of rodomontade. Much of the novel’s construction is clumsy. Still, many of its details, especially in the scenes of violence, have a vivid particularity that may have been rooted in the author’s medical experience. Some of these details must have been shocking for the time and still perhaps can raise an eyebrow: the philanthropic Leigh kicking an assailant in the head after knocking him to the ground; Mizpra putting her gelded husband into a hypnotic trance and sticking his tie pin into his forehead, ear lobes and cheek, whereupon, at the sight of blood, she experiences (if we read between the lines) an orgasm; Marcia having a drunken orgy at the funeral of her little boy and trying to force beer into his mouth; Mizpra removing the body of Christ from a crucifix and substituting the scourged half-naked body of Mary (‘It was Her suffering that was so fearful, not his.’), placing the ‘thorned flagellum’ on the horizontal bar of the cross. This is strong stuff for 1901 and helps make this an unusual and interesting book on several counts. The book is dedicated to Edgar Allan Poe.