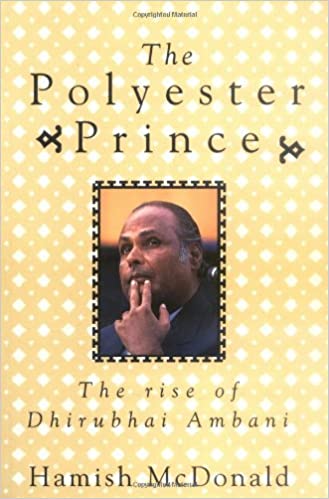 The Polyester Prince By Hamish McDonald

The Polyester Prince The Rise of Dhirubhai Ambani is an unauthorized biography of Indian business tycoon and Reliance Industries founder Dhirubhai Ambani. The book was written by Australian journalist Hamish McDonald and first published by Allen & Unwin, an Australian publisher, in 1998.

Until the arrival of Ambani, India’s big business scene was dominated by a few industrial houses from British times. In just 26 years since its foundation, Ambani’s Reliance group has risen to rival these houses. By 1995 the group had 2.6 million investors.
Along with the dramatic expansion of the Reliance Group have come intricate political connections, a whole raft of corruption charges and a rollercoaster of booms and crashes for Ambani and his company. This study shows how capitalism emerges by fair means and foul in the new industrial countries of the Third World, and is one of very few studies of Asian or Third World tycoons.

The Polyester Prince: The Rise of Dhirubhai Ambani PDF