Home General Subjects Books Chemistry Books The Quantum in Chemistry – An Experimentalist’s View by Roger Grinter
The Quantum in Chemistry – An Experimentalist’s View by Roger Grinter :: In his prologue to ‘The Go-Between’ L.P. Hartley wrote: ‘The past is a foreign country: they do things differently there.’ He might have been describing quantum mechanics, which goes some way to explaining why it is normally only the denizens of that strange land, the theoreticians, who dare to enter into print about it. So what is a self-confessed experimentalist doing there? Of the many factors that have influenced the development of chemistry in the second half of the 20th century, none has been more important than the inexorable diffusion across the traditional subject boundaries of concepts, which have their origins in theoretical physics. Students of chemistry and research scientists alike, not only in chemistry, are under continual pressure to assimilate and apply these ideas; quantum mechanics forms a central part of many of them. But the learning is hard, and although there are many excellent books they tend to be written by authors who are by nature theoreticians and whose approach to the subject differs from that of the experimentalist in many ways. I know, because I have been in this position all my working life.
My original motivation, which has not changed with the years, was to interpret myself, in as exact a way as I was able, the experimental observations that I as a spectroscopist was making. In the course of my studies I spent a lot of time with most of the classic texts on the subject which are directed at chemists and some intended for physicists. Those in the English language that is. However, as excellent as they mostly are, two aspects of them often failed to satisfy me. Firstly, their authors are very good mathematicians and do not always make allowances for the lesser experience and ability in those realms of people like me. This also has the unfortunate side effect of encouraging students at all levels to believe that their difficulties are attributable to a lack of mathematical expertise when they are, in fact, more commonly due to a failure to grasp some essential quantum-mechanical concept. 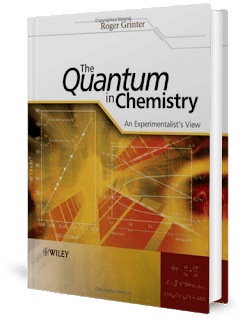 The Quantum in Chemistry – An Experimentalist’s View by Roger Grinter

This book explores the way in which quantum theory has become central to our understanding of the behaviour of atoms and molecules. It looks at the way in which this underlies so many of the experimental measurements we make, how we interpret those experiments and the language which we use to describe our results. It attempts to provide an account of the quantum theory and some of its applications to chemistry.

This book is for researchers working on experimental aspects of chemistry and the allied sciences at all levels, from advanced undergraduates to experienced research project leaders, wishing to improve, by self-study or in small research-orientated groups, their understanding of the ways in which quantum mechanics can be applied to their problems. The book also aims to provide useful background material for teachers of quantum mechanics courses and their students.

The Quantum in Chemistry: An Experimentalist’s View