Home A Special Books The Teleportation Accident by Ned Beauman 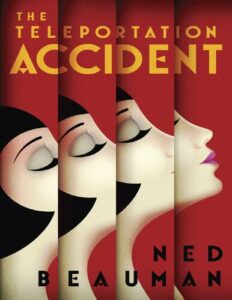 Long-listed for the 2012 Man Booker Prize, The Teleportation Accident is a hilarious sci-fi noir about sex, Satan, and teleportation devices.
When you haven’t had sex in a long time, it feels like the worst thing that could ever happen.

It probably isn’t if you’re living in Germany in the 1930s.

But that’s no consolation to Egon Loeser, whose carnal misfortunes will push him from the experimental theaters of Berlin to the absinthe bars of Paris to the physics laboratories of Los Angeles, trying all the while to solve two mysteries: Was it really a deal with Satan that claimed the life of his hero, Renaissance set designer Adriano Lavicini, creator of the so-called Teleportation Device? And why is it that a handsome, clever, modest guy like him can’t-just once in a while-get himself laid?

Ned Bauman has crafted a stunningly inventive, exceptionally funny, dangerously unsteady, and (primarily) coherent novel about sex, violence, space, time, and how the best way to deal with history is to ignore it.