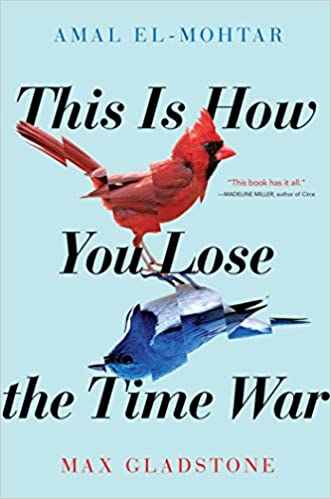 In the ashes of a dying world, Red finds a letter marked “Burn before reading. Signed, Blue.”

So begins an unlikely correspondence between two rival agents in a war that stretches through the vast reaches of time and space.

Red belongs to the Agency, a post-singularity technotopia. Blue belongs to Garden, a single vast consciousness embedded in all organic matter. Their pasts are bloody and their futures mutually exclusive. They have nothing in common save that they’re the best, and they’re alone.

Now what began as a battlefield boast grows into a dangerous game, one both Red and Blue are determined to win. Because winning’s what you do in war. Isn’t it?

A tour de force collaboration from two powerhouse writers that spans the whole of time and space.

Co-written by two award-winning writers, This Is How You Lose the Time War is an epic love story spanning time and space.

Among the ashes of a dying world, an agent of the Commandant finds a letter. It reads: Burn before reading.
Thus begins an unlikely correspondence between two rival agents hellbent on securing the best possible future for their warring factions. Now, what began as a taunt, a battlefield boast, grows into something more. Something epic. Something romantic. Something that could change the past and the future.

Except the discovery of their bond would mean death for each of them. There’s still a war going on, after all. And someone has to win that war. That’s how war works. Right?

‘Rich and strange, a romantic tour through all of time and the multiverse’ Martha Wells, Hugo and Nebula Award-winning author of The Murderbot Diaries