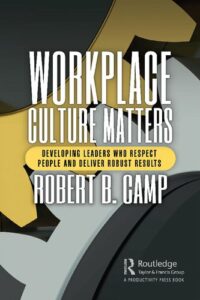 Written in a novel format, Culture Matters addresses the challenge of changing a sick” culture. Some organizations wake up one day and realize they have become something they never intended. Their employees run scared. There is no innovation, only blind obedience. There are warlords within the ranks of management and they fight over turf without considering the best interests of customers, their employees, or their organization as a whole. At the Charleston, SC branch of Copper-Bottom Insurance, the wake-up call comes when an employee files a lawsuit against the company and its leaders. The Charleston division Vice President, Jack Simmons, is on probation and given an ultimatum: !change the culture!” Jack understood the “Or be fired” implication all too well. He scrambles to find help and runs into an old friend, Don Spears, from Friedman Electronics. With Don’s help, Jack begins the journey to healing his organization. During their first visit, Don and his Director of Continuous Improvement, Tim Stark, help Jack make an important discovery: Copper-Bottom’s executives are not showing their people respect. Don and Tim point to the following observations as proof. Copper-Bottom leaders are: – Using top-down, “command and control” leadership behaviors rather than recognizing their people as Subject Matter Experts and listening to them. – Issuing instructions to their people, rather than observing, then improving performance through coaching. – Keeping employees in the dark about their work’s impact on the organization’s mission. – Unaware of the obstacles in their people’s paths; hence, they never use their positions authority to remove those obstacles. – Staying in their offices, aloof to the difficulties their subordinates face. As Don and Tim see it, Copper-Bottom’s problems stem from how its leaders lead. After the executive who precipitated the lawsuit is let go, the Friedman team begins teaching Copper-Bottom’s executives that a healthy culture starts at the leadership level. Don, Friedman’s General Manager, states that cultures change when their leaders change. In short, leaders need to initiate the changes to the culture by first demonstrating the desired behavior. So begins the process of re-educating Copper-Bottom’s leaders on the difference between managing and leading. In short order, Tim starts to work with Jack’s leadership team while Don takes Jack to Friedman’s Oakland facility. There Jack learns: – to first concentrate on surrounding himself with the right people. – the importance of top-down metrics to which leaders first hold themselves accountable. – Cascading their metrics (KPIs) down through their organizations and using a dialogue about them to develop relationships of respect. Although a long way from complete, by the end of Jack’s six-month probation, Copper-Bottom has made significant strides and is well on its way to changing its culture. Jack will learn that he is not the only one to appreciate the new developments.