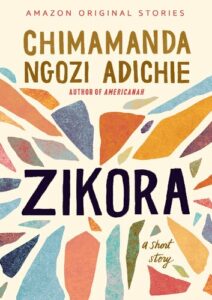 The emotional storms weathered by a mother and daughter yield a profound new understanding in a moving short story by the bestselling, award-winning author of Americanah and We Should All Be Feminists.

When Zikora, a DC lawyer from Nigeria, tells her equally high-powered lover that she’s pregnant, he abandons her. But it’s Zikora’s demanding, self-possessed mother, in town for the birth, who makes Zikora feel like a lonely little girl all over again. Stunned by the speed with which her ideal life fell apart, she turns to reflect on her mother’s painful past and struggle for dignity. Preparing for motherhood, Zikora begins to see more clearly what her own mother wants for her, for her new baby, and for herself.

Who wrote the book?

Her work has been translated into more than thirty different languages and has been published in The New Yorker, Granta, The O. Henry Prize Stories, the Financial Times, and Zoetrope, among other places. She wrote the novels Purple Hibiscus, which won the Commonwealth Writers’ Prize and the Hurston/Wright Legacy Award, Half of a Yellow Sun, which won the Orange Prize and was a National Book Critics Circle Award Finalist and a New York Times Notable Book, and Americanah, which won the National Book Critics Circle Award and was named one of The New York Times Top Ten Best Books of 2013. Ms. Adichie also wrote The Thing Around Your Neck, a book of short stories. Ms. Adichie has been asked to speak in many different places. The Danger of a Single Story, her TED Talk from 2009, is now one of the most-watched TED Talks of all time. Her talk “We Should All Be Feminists,” which she gave in 2012, started a conversation about feminism worldwide. In 2014, it was turned into a book. Dear Ijeawele: A Feminist Manifesto in Fifteen Suggestions was her most recent book. It came out in March 2017. Ms. Adichie splits her time between the United States and Nigeria. She has been given a fellowship from the MacArthur Foundation.