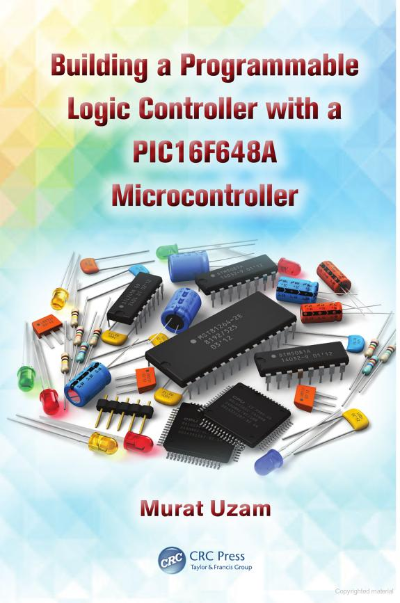 Building a Programmable Logic Controller with a PIC16F648A Microcontroller

He is currently a professor in the Department of Electrical and Electronics Engineering at Melikşah University in Kayseri, Turkey.

The details of his studies are accessible from his web page: http://www.meliksah.edu.tr/muzam.

Programmable logic controllers (PLCs) have been used extensively in industry for the past five decades. PLC manufacturers offer different PLCs in terms of functions, program memories, and the number of inputs/outputs (I/Os), ranging from a few to thousands of I/Os.

With a series of 22 articles published in Electronics World magazine (http//www.electronicsworld.co.uk/) between the years 2008 and 2010, the design and implementation of a PIC16F648Abased PLC were described.

This book is based on an improved version of the project reported in Electronics World magazine. This book is written for advanced students, practicing engineers, and hobbyists who want to learn how to design and use a microcontroller-based PLC.

The book assumes the reader has taken courses in digital logic design, microcontrollers, and PLCs. In addition, the reader is expected to be familiar with the PIC16F series of microcontrollers and to have been exposed to writing programs using PIC assembly language within an MPLAB integrated development environment.

The CD-ROM that accompanies this book contains all the program source files and hex files for the examples described in the book. In addition, PCB files of the CPU and I/O extension boards of the PIC16F648A-based PLC are also included on the CD-ROM.