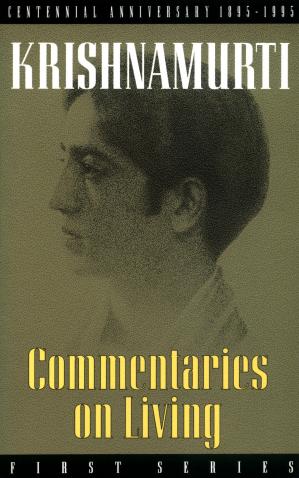 Commentaries on Living: First Series From the notebooks of J. Krishnamurti is a series of books by Jiddu Krishnamurti. It consists of 3 volumes, originally published in 1956, 1958 and 1960.

The essential message of J. Krishnamurti, revered philosopher, and spiritual teacher, challenges the limits of ordinary thought. In talks to audiences worldwide, he pointed out the tangled net of ideas, organizational beliefs, and psychological mindsets in which humanity is caught, and that truth-the understanding of what is-not effort is the key factor of human liberation.

Commentaries on Living, a three-volume series, records Krishnamurti’s meetings with individual seekers of truth from all walks of life. In these dialogues, he reveals the thought-centered roots of human sorrow and comments on the struggles and issues common to those who strive to break the boundaries of personality and self-limitation. In over fifty essays in each volume, Krishnamurti explores topics as diverse as knowledge, truth, fulfillment, meditation, love, effort, seeking life and death and education.

The series invites readers to take a ‘voyage on an unchartered sea’ with Krishnamurti in his exploration of the conditioning of the mind and its freedom.