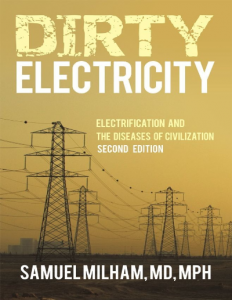 This book is written in an urgent attempt to warn you about what I believe to be a global man-made health threat.

he gave us the magic of electric light, heat, and power, but inadvertently opened a Pandora’s Box of unimaginable illness and death.

There is a high likelihood that most of the twentieth century “diseases of civilization,” including cardiovascular disease, malignant neoplasms (cancer), diabetes,

and suicide, are not caused by lifestyle alone, but by certain physical aspects of electricity itself.

The data to prove this has been available since 1930, but no one investigated it. Consequently, the “wars” on cancer and cardiovascular diseases are doomed to failure,

because a critical etiologic factor has not been recognized. What’s more, these very diseases are now increasing in the population in direct proportion to our increasing exposures to high technology electrical devices.

The electrical part of this story begins with a childhood leukemia cluster centered in Rome, New York, that I studied in the 1960s.

I didn’t realize that the cluster was probably caused by radar exposure until many years later when Stanislaw Szmiegelski,

a researcher in Poland, reported that radar and radioexposed military personnel had high rates of leukemia and lymphoma (Szmiegelski 1996).

In the United States, the emergence of childhood leukemia in the 1930s, and the spread of the age two-through-five-year peak for the major leukemia of childhood,

common acute lymphoblastic leukemia, was strongly correlated with the gradual spread of electrification from urban into rural areas (Milham & Ossiander 2001).

Even today, this childhood leukemia age peak does not appear in non-electrified areas like sub-Saharan Africa.

At that time, I could not believe that 60-Hz magnetic fields could be responsible. A few years later, a 2004 newspaper article about a cancer cluster in teachers at the La Quinta Middle School in Southern California led me to conduct another study,

which showed that high frequency voltage transients (called “dirty electricity” by the utility industry) was a potent universal carcinogen.

Dirty electricity rides along on the sixty-cycle sine wave of alternating current (AC) power as high frequency voltage transients, between two and one hundred kilohertz.

Get Free PDF Book : Dirty Electricity Electrification and the Diseases of Civilization

Get Paper Book : Dirty Electricity Electrification and the Diseases of Civilization