Python All In One For Dummies by Shovic and Simpson 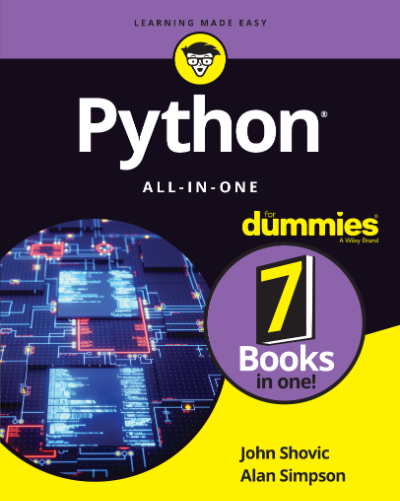 Python All In One For Dummies by John Shovic and Alan Simpson  | PDF Free Download.

Book 1: Getting Started with Python

Book 6: Talking to Hardware with Python

Introduction to Python All In One For Dummies PDF

The power of Python. The Python language is becoming more and more popular, and in 2017 it became the most popular language in the world according to IEEE Spectrum.

The power of Python is real. Why is Python the number one language? Because it is incredibly easy to learn and use.

Part of it is its simplified syntax and its natural-language flow, but a lot of it has to do with the amazing user community and the breadth of applications available.

About Python For Dummies eBook

This book is a reference manual to guide you through the process of learning Python and how to use it in modern computer applications, such as data science, artificial intelligence, physical computing, and robotics.

If you are looking to learn a little about a lot of exciting things, then this is the book for you. It gives you an introduction to the topics that you will need to go deeper into any of these areas of technology.

This book guides you through the Python language and then it takes you on a tour through some really cool libraries and technologies (the Raspberry Pi, robotics, AI, data science, and so on) all revolving around the Python language.

When you work on new projects and new technologies, Python is there for you with an incredibly diverse number of libraries just waiting for you to use.

This is a hands-on book. There are examples and code all throughout the book. You are expected to take the code, run it, and then modify it to do what you want. You don’t just buy a robot, you build it so you can understand all the pieces and can make sense of the way Python works with the robot to control all the motors and sensors.

Robotics is complicated, but Python gives you the code that controls the robot. And Python even allows us to tie these pieces together and use, say, AI in robotics.

In this book, we take you through the basics of the Python language in small, easy-to-understand steps.

After we have introduced you to the language, then we step into the world of Python and artificial intelligence, exploring programming in machine learning and neural networks using Python and TensorFlow and actually working on real problems and real software, not just toy applications.

After that, we’re off to the exciting world of Big Data and data science with Python. We look at big public data sets such as medical and environmental data all using Python.

Finally, you get to experience the magic of what I call “physical computing.” Using the small, inexpensive Raspberry Pi computer (it’s small but incredibly popular) we show you how to use Python to control motors and read sensors.

This is a lead-up to our final book, “Python and Robotics.” Here you learn how to build a robot and how to control that robot with Python and your own programs, even using artificial intelligence.

This is not your mother’s RC car. Python data science, robotics, AI, and fun all in the same book. This book won’t make you understand everything about these fields, but it will give you a great introduction to the terminology and the power of Python in all these fields.

Download Python All In One For Dummies by Shovic and Simpson PDF Free.