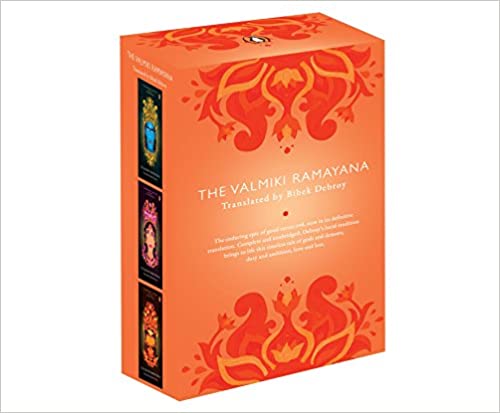 The Valmiki Ramayana Box Set is religious books by Bibek Debroy. It is Rewritten and translation of Rāmāyana is one of the two major Sanskrit epics of ancient India, the other being the Mahābhārata. Along with the Mahābhārata, it forms the Hindu Itihasa. The epic, traditionally ascribed to the Maharishi Valmiki, narrates the life of Rama, a legendary prince of Ayodhya city in the kingdom of Kosala.

The Valmiki Ramayana remains a living force in the lives of the Indian people. A timeless epic, it recounts the legend of the noble prince Rama and his battle to vanquish the demon king Ravana.

Even before he is crowned king of Ayodhya, Rama is exiled to the Dandaka forests where he is accompanied by his beauteous wife Sita and loyal brother Lakshmana. Deep in the jungle, Sita is abducted by Ravana and taken to his island kingdom Lanka, setting into motion a dramatic chain of events that culminates in an epoch-defining war. Filled with adventure and spectacle, the Ramayana is also the poignant story of a family caught up in the conflict between personal duty and individual desires.

In Bibek Debroy’s majestic new translation, the complete and unabridged text of the Critical Edition of this beloved epic can now be relished by a new generation of readers.