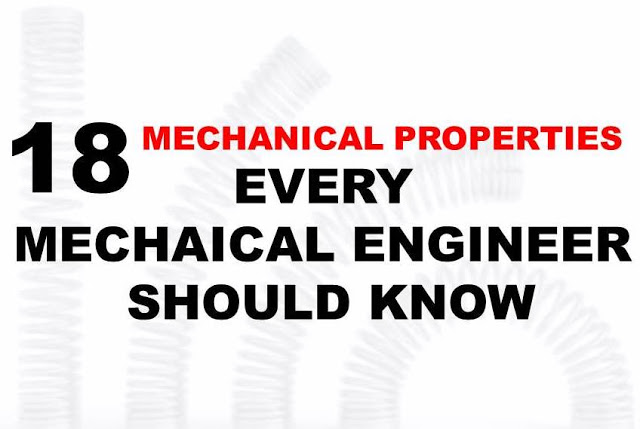 Material selection for any product is main part of a manufacturing industries. The quality of product is highly depends upon its material properties. These properties are used to distinguish materials from each other.

A harder material is used to make tools.

A ductile material is used to draw wires.

There are mainly two types of materials. First one is metal and other one is non metals. Metals are classified into two types : Ferrous metals and Non-ferrous metals.

Ferrous metals mainly consist iron with comparatively small addition of other materials. It includes iron and its alloy such as cast iron, steel, HSS etc. Ferrous metals are widely used in mechanical industries for its various advantages.

Most Mechanical properties are associated with metals. These are

The ability of material to withstand load without failure is known as strength. If a material can bear more load, it means it has more strength. Strength of any material mainly depends on type of loading and deformation before fracture. According to loading types, strength can be classified into three types.

According to the deformation before fracture, strength can be classified into three types.

A material which has same elastic properties along its all loading direction known as isotropic material.

The ability of material to undergo some degree of permanent deformation without failure after removal of load is known as plasticity. This property is used for shaping material by metal working. It is mainly depends on temperature and elastic strength of material.

If the percentage elongation is greater than 5% in a gauge length 50 mm, the material is ductile and if it less than 5% it is not.

Brittleness is a property by virtue of which, a material will fail under loading without significant change in dimension. Glass and cast iron are well known brittle materials.

The ability of material to resist elastic deformation or deflection during loading, known as stiffness.  A material which offers small change in dimension during loading is more stiffer. For example steel is stiffer than aluminum.

The property of a material to resist penetration is known as hardness. It is an ability to resist scratching, abrasion or cutting.

It is also define as an ability to resist fracture under point loading.

Toughness is defined as an ability to withstand with plastic or elastic deformation without failure. It is defined as the amount of energy absorbed before actual fracture.

A property by virtue of which a metal can flatten into thin sheets, known  as malleability. It is also define as a property which permits plastic deformation under compression loading.

A property by virtue of which a material can be cut easily.

The ability of metal to dissipate the energy of vibration or cyclic stress is called damping. Cast iron has good damping property, that’s why most of machines body made by cast iron.

The loss of ductility of a metal caused by physical or chemical changes, which make it brittle, is called embrittlement.

This is all about mechanical properties of material. If you have any query regarding this article, ask by commenting. If you like this article, don’t forget to share it with your friends. Subscribe our website for more interesting articles.