Home A Special Books A Contract with God 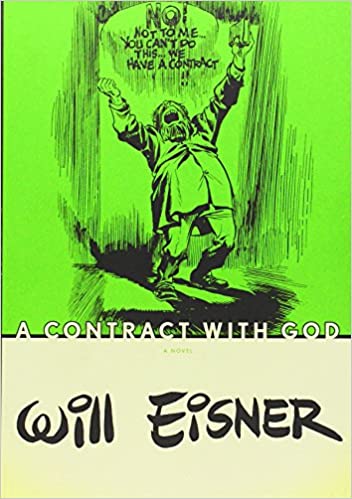 A Contract with God By Will Eisner

A Contract with God and Other Tenement Stories is a graphic comic novel by American cartoonist Will Eisner published in 1978. The book’s short story cycle revolves around poor Jewish characters who live in a tenement in New York City.

Will Eisner was present at the dawn of comics. In the 1940s, he pushed the boundaries of the medium with his acclaimed weekly comic strip The Spirit, and with the publication of A Contract with God in 1978, he created a new medium altogether: the graphic novel. It was unlike anything seen before, heralding an era when serious cartoonists were liberated from the limiting confines of the comic strip. Eisner’s work was a shining example of what comics could be: as inventive, moving, and complex as any literary art form. Eisner considered himself “a graphic witness reporting on life, death, heartbreak, and the never-ending struggle to prevail.” A Contract with God begins with a gripping tale that mirrors the artist’s real-life tragedy, the death of his daughter. Frimme Hersh, a devout Jew, questions his relationship with God after the loss of his own beloved child. Hersh’s crisis is intertwined with the lives of the other unforgettable denizens of Eisner’s iconic Dropsie Avenue, a fictionalized version of the quintessential New York City street where he came of age at the height of the Depression.

It’s fair to say that Will Eisner invented modern comic art.A Contract with Godhas been called the first graphic novel, and its divergence from traditional comics themes and forms highlights Eisner’s foresight and brilliance. Dealing with stories and memories from his childhood in a Bronx tenement, he explores the brutality, fragility, and tenderness possible among people living in close quarters close to the poverty line. The four stories here are tough but funny, deep but finely detailed, much like the traditional Jewish stories he drew upon to flavor his own work. Ending reflectively (and perhaps autobiographically),A Contract with Godshows us a young man peering out into his city as he decides whether and how to face adulthood. You won’t see that in the funny papers.–Rob Lightner

A Contract With God PDF

Series: The Contract With God Trilogy 1