Activating Agents and Protecting Groups by Pearson and Roush 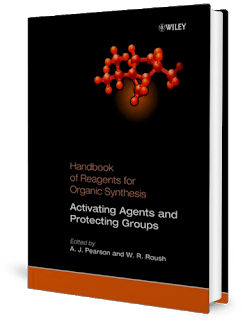 Recognising the need for a cost effective reference work that deals not only with the most popular reagents in synthesis but also reaches the widest possible audience of practising organic chemists, the editors of ‘The Encyclopedia of Reagents for Organic Synthesis’ (EROS) have developed a list of the most important and useful reagents employed in the field, conveniently presented in four separate volumes. The reagents included in this volume reflect the fact that protecting groups and activation procedures are often used in combination. There are many instances in the synthesis of natural and unnatural products, pharmaceuticals, oligosaccharides, and oligonucleotides, etc., where similar tactics must be employed to prevent undesired activation or reaction of functionality. Accordingly, the most important reagents used to protect amines, alcohols, carboxyl, carbonyl and other reactive functional groups are included in this volume. The list of activating agents includes well known reagents that activate functional groups for substitution or elimination reactions, as well as less traditional examples, e.g. HMPA used to “activate” enolates and alkyllithium reagents to increase the nucleophilicity. Each article contains all of the information found in EROS as well as expanded related reagents listings and additional references to enable the reader to quickly access a broad range of information that is beyond the scope of the reagent entries themselves. This text will prove an invaluable resource.