Home Chemistry Books Analytical Chemistry Advances in Chromatography, Volume 53 by Eli Grushka and Nelu Grinberg
Advances in Chromatography, Volume 53 by Eli Grushka and Nelu Grinberg : Since the beginning of chiral chromatography in 1930s, researchers have taken an interest in mechanisms responsible for the resolution of racemic mixtures on optically active adsorbents. It was understood that behind this phenomenon lies “the asymmetric character of the adsorbing surface, which causes it to react differently towards the enantiomorphous components of the racemic compound” [1]. From this, it immediately followed that the stereochemical configuration of enantiomers was the major factor affecting their interaction with the chiral surface. Hence, a study of the dependence of the adsorption affinity on the spatial configuration of solutes seemed to be a key step in the elucidation of the nature of enantioseparation [2]. This fundamental program of research took impulse after the famous publication by Dalgliesh [3], who attempted to explain the separation of enantiomers of amino acids on cellulose based on spatial considerations. At that time, there were no tools to investigate interactions between a solute and an adsorbent on the molecular level, so researchers used indirect integral characteristics, such as retention factor (k′) and enantioselectivity (α), to elucidate mechanisms resulting in different migration velocities of optical antipodes in a chiral media. This approach is called macroscopic because it disregards the molecular structure of the system under investigation and operates with quantities averaged (in thermodynamic sense) over large ensembles of molecules and over a certain period of time. Tremendous improvements in molecular techniques made in the past three decades, in particular, in molecular modeling [4,5] as well as in spectrometric methods (NMR, FT-IR, VCD, etc.) and x-ray crystallography [6] allowed researchers to study solute– selector binding at the microscopic level.
Download to Read more…. 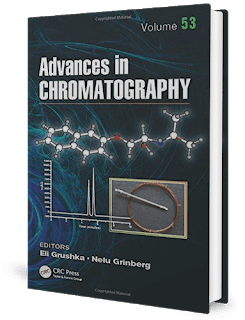 Advances in Chromatography, Volume 53 by Eli Grushka and Nelu Grinberg