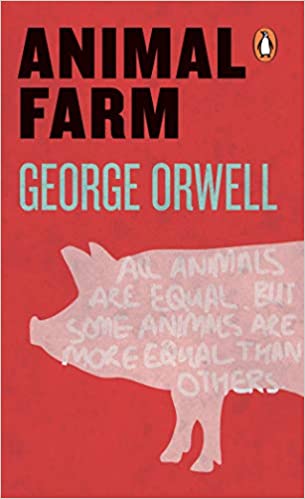 Animal Farm is an allegorical novella by George Orwell, first published in England on 17 August 1945. The book tells the story of a group of farm animals who rebel against their human farmer, hoping to create a society where the animals can be equal, free, and happy.

Animal Farm by George Orwell is an allegorical work of fiction. Depicting rising revolt among the animals, who wish to take over the humans, the author wrote one of the best satire of the era. Animals, who live in Mr. Jones farm are tired of serving human and find it very exploiting as they use animals for all their needs. Rebellion starts on the day when Mr. Jones forgets to feed the animals. Under the charge of two pigs: Napoleon and Snowball, animals thus plan to invade humans and take over the farm.

The attempt is initiated by changing the farm’s name to ‘Animal Farm’. Agenda raised was to seek benefits to four legged animals and other animals of the farm, for which they selected ideals, who got corrupted with passing time. The book reflects incidents and events that led to Russian Revolution in 1917, followed by Soviet Union’s Stalinist Era. George Orwell, who was a democratic socialist was in opposition of Joseph Stalin and Moscow-directed Stalinism, result to which is a book like Animal farm- one of his best satirical fiction novel.