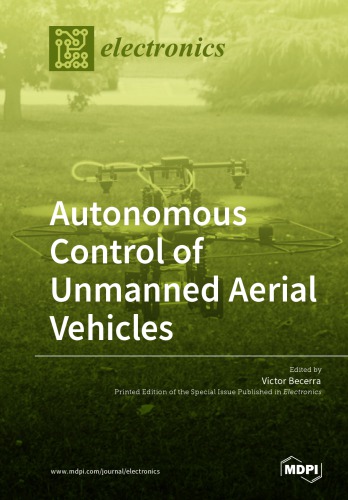 Unmanned aerial vehicles (UAVs) are being increasingly used in different applications in both military and civilian domains. These applications include, for example, surveillance, reconnaissance,remote sensing, target acquisition, border patrol, infrastructure monitoring, aerial imaging, industrial inspection, and emergency medical aid. Vehicles that can be considered autonomous must be able to make decisions and react to events without direct intervention by humans [1]. Some fundamental aspects are common to all autonomous vehicles. These aspects include the ability to sense and perceive the environment, analyze the sensed information, communicate, plan, and make decisions, as well as act using control algorithms and actuators. Although some UAVs are becoming able to perform increasingly complex autonomous maneuvers, most UAVs are not entirely independent; instead, they are mostly operated remotely by humans [2]. Many technological and algorithmic developments are still needed to make UAVs fully autonomous. For instance, UAVs will need to improve their sense of obstacles and subsequent avoidance. This becomes particularly important as autonomous UAVs start to operate in the same civil air space used by other aircraft. Operating unmanned flying vehicles is functional, yet it can be challenging when the car interacts with the environment [3]. This interaction could take the form of landing on landing pads, docking into a station, approaching terrain for inspection, or approaching another aircraft for refueling. Such tasks can often be solved when the vehicle is remotely piloted, especially when the pilot has a first-person view of the environment. However, human control may not always be possible, for example, due to the lack of a suitable data link or the precision and/or speed required for the maneuver, which may be beyond human capabilities. Thus, it is essential to find effective and flexible strategies to enable vehicles to perform such tasks autonomously. Well-developed features of autonomous UAV control include, for instance, stability enhancement and waypoint flight [4]. However, new developments in the design of UAVs and the emergence of new application areas demand robust and adaptive control techniques for different flight conditions, aggressive maneuvering flight, robust disturbance rejection, obstacle avoidance, fault tolerance, formation flying, and the use of new sensing and perception paradigms, such as computer vision. Even when the vehicle performs tasks autonomously, the efficiency and reliability of the communication link to the ground station or other aerial vehicles are essential, as the autonomous UAV may need to send information about itself or its environment to the ground station or other vehicles, or it may need to receive updated mission parameters from the ground station or data from other cars. To achieve all the ambitious requirements that autonomous operation brings about, systematic and innovative methods for planning, navigation, decision-making, control, sensing, and communication are needed.