Home A Special Books Bessie Head and the Trauma of Exile 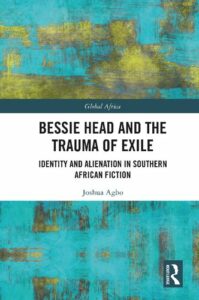 This book investigates themes of exile and oppression in Southern Africa across Bessie Head’s novels and short fiction. An exile herself, arriving in Botswana as a South African refugee, Bessie Head’s fiction serves as an important example of African exile literature. This book argues that Head’s characters are driven to exile as a result of their socio-political ambivalence while still in South Africa and that this sense of discomfort follows them to their new lives. Investigating themes of trauma and identity politics across colonial and post-colonial contexts, this book also addresses the important theme of black-on-black prejudice and hostility, which is often overlooked in studies of Head’s work. Covering Head’s shorter fiction as well as her major novels When Rain Clouds Gather (1969), Maru (1971), A Question of Power (1973), Serowe: Village of the Rain Wind (1981), and A Bewitched Crossroads: An African Saga (1984), this book will be of interest to researchers of African literature and postcolonial history.

Cover
Half Title
Series Information
Title Page
Copyright Page
Dedication
Table of Contents
List of Figures
Foreword
Preface
Acknowledgments
1 The Literature of the Oppressed
Biography of Bessie Emery Amelia Head: An African Literary Tigress
Works Cited
2 Exile, Post-Coloniality, Trauma: Theories and Perspectives
The Literature of Exile
The Literature of Exile Within Colonial and Post-Colonial Context(s)
The Trauma of Exile
Home and Homecoming in the South African Context
Theory-building of Exilic Compromise: the Neither-Here-Nor-There of Desire and Belonging
Note
Works Cited
3 The Ordeals of Crossing: From Home to Exile
Makhaya and His Quest for Elsewhereness
The Pangs of Desiring to Belong to a “Free Society”
Narrative Style and the Elements of Satire
Works Cited
4 The Black-On-Black Prejudice
The Theorisation of Maru As a Political/Protest Novel
Black-on-black Prejudice in Dilepe (Botswana)
The Drum of Love: a Recipe for Tribal/Racial Healing
The Novel and its Style of Narration
Against the Normative Doctrine of Story-Telling Structure
Reading the Novel in the Contexts of Symbolism and Imagery of Patriarchal Dominance
Hybridity of the Self: the Split Personality of Margaret
Works Cited
5 Black Power and Trauma in a Shut-In World
The Narrative Style/Point of View in the Novel
Autobiographical Aspects: Bessie Head and Elizabeth the Protagonist
Racism in the Novel
Trauma and Horror
Elizabeth’s Process of Recovery
The Pains of Exile, Elizabeth, and the World Elsewhere
Black Power as an Instrument of Oppression in a Shut-In World
Works Cited
6 Fiction Through History or History Through Fiction?
The History of Tribal Formations in Botswana
The Merging of Fact With Fiction: A Case of Serowe: Village of the Rain Wind and A Bewitched Crossroads: an African Saga
A Critical Critique of a Bewitched Crossroads: An African Saga as a Historical Novel
Works Cited
7 Patriarchy and Power: Women on the Edge of the Cliff
Works Cited
8 Conclusion: Towards the Unification of Thematic Trajectories
Works Cited
Index

Bessie Head and the Trauma of Exile: Identity and Alienation in Southern African Fiction PDF