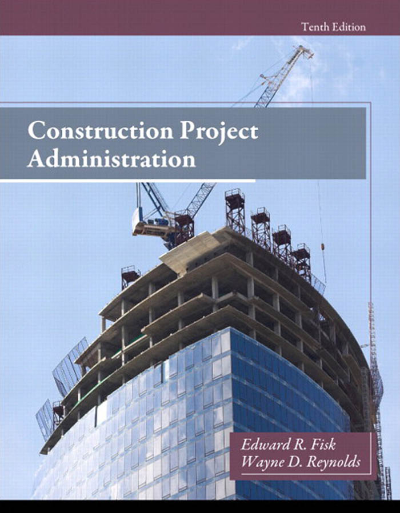 Edward R. Fisk, PE, LS, was a construction consultant in Orange, California. He was a licensed civil and structural engineer, land surveyor, and licensed general contractor and held licenses in 13 states.

Prior to that he served as Corporate Director of Construction Management for J.M. Montgomery Engineers (now MWH Global), and VTN Consolidated, Inc., and was an Engineer and a Field Engineer for Bechtel Corp., Power Division.

He had extensive experience in both the public and private sectors. He was a Life Fellow of the American Society of Civil Engineers and former chairman of its Construction Division and was a Fellow of the National Academy of Forensic Engineers.

He lectured nationally and internationally for the American Society of Civil Engineers until he succeeded by coauthor Wayne Reynolds.

Wayne D. Reynolds, PE, is a Professor and Program Coordinator in the Department of Applied Engineering and Technology at Eastern Kentucky University.

He teaches or has taught introduction to construction, project organization, and supervision, scheduling and cost control, contracts and bidding, quantity and cost estimating, engineering economy, statics, structures, and soils in the Construction Management program.

He also lectures nationally and internationally for the American Society of Civil Engineers. He received his B.S. degree from the U.S. Military Academy and an M.S. degree in civil engineering from Ohio State University.

Mr. Fisk’s original preface still remains applicable to
this, the tenth edition: The principal objective of this book is to provide
those of us who are active in the construction industry with a single source of
information that will help address the responsibilities and risks that we are likely
to encounter.

The principles covered in this book have been gleaned from
hundreds of projects worth billions of dollars over hundreds of years of
construction. They are applicable to horizontal as well as vertical
construction; small and large projects; and government, commercial, industrial,
and private construction.

All may not be applicable to a particular project,
but they remain valid principles nonetheless. The revisions in this edition
were necessary because of changes in technology and industry practices as well
as shifts in the way that owners choose to have projects constructed.

There
have been some changes made as a result of user feedback and chapters
reorganized in order to improve the flow of the material.

The material covering Preconstruction Conferences in
Chapters 10 and 12 have been combined into Chapter 12 to minimize redundancy and
to improve readability.

Since so many projects are now being constructed
using the Design-Build (DB) project delivery system, it became appropriate to
elaborate further on how DB impacts the principles discussed throughout the
book.

With almost universal usage of computers to schedule projects, arrow
diagramming has fallen into disuse and hence most of the arrow diagramming the discussion was removed from Chapter 14.

Leadership in Energy and
Environmental Design (LEED) has become so prevalent in the construction industry that the author felt it appropriate to address its impacts on material
already presented in the book.

Experience Modification Rating (EMR) was also added
to Chapter 8 to further emphasize the importance of safety on all construction
sites.

There have been some changes to chapter
questions in order to be consistent with the revised text material.

I owe them
both a great deal of gratitude for their significant contributions to improving
the breadth and depth of this edition. I also wish to thank my wife, Karen
Reynolds, for her patience and support, while I  worked on this revision.

And last, but not least, I wish to thank my mentor, Mr. Ed Fisk, who taught me
so much and gave me the opportunity to keep his vision alive in this textbook.

He is sorely missed. While many people have contributed to writing this book
throughout the years, I alone take responsibility for any errors found in this
edition. The author is grateful to the many contributions made since this book
was first published.

The author would also like to thank the reviewers of this edition for their helpful
insights: Scott Arias and Bryan Dyer, Eastern Kentucky University; Denise
Gravitt, Western Illinois University; and Matthew W. Nawn, Frederick Community
College.