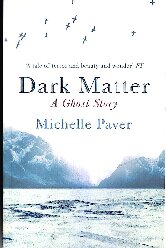 January 1, 1937, War clouds are gathering over a fogged-in London. Jack, 28, is needy, lonely, and determined to make a difference in his life. So when the opportunity to join an Arctic expedition presents itself, he seizes it. The ship departs Norway with five men and eight huskies, traversing the Barents Sea by the light of the midnight sun. Finally, they arrive at the secluded, desolate bay where they will spend the next year camping. Gruhuken.

However, the Arctic summer is fleeting. As night returns to seize the land, Jack is filled with dread. His companions are compelled to leave one by one. He is faced with a difficult decision. Stay or leave. Soon, he’ll glimpse the last rays of sunlight before the arctic night engulfs the camp in months of darkness. He’ll soon reach the point of no return when the sea will freeze and make escape impossible.

Dark Matter is a spellbinding read – the subtly unsettling, understated ghost story MR James might have written had he visited the Arctic (GUARDIAN)

Told in the increasingly fearful words of Jack as he writes in his journal, this is a blood-curdling ghost story, evocative not just of icy northern wastes but of a mind as trapped, it turns in on itself (DAILY MAIL)

Paver has created a tale of terror and beauty, and wonder. Mission accomplished: at last, a story that makes you check that you’ve locked all the doors and leaves you very thankful for the electric light. In a world of CGI-induced chills, a good old-fashioned ghost story can still clutch at the heart (FINANCIAL TIMES)

Paver is the mistress of suspense, and the strangeness that humans can suffer from when exposed to the Arctic wilderness is brilliantly exploited in this period piece (THE TIMES)

The ultimate test of a good ghost story is, surely, whether you feel panicked reading it in bed at midnight; two-thirds through, I found myself suddenly afraid to look out of the windows, so I’ll call it a success (OBSERVER)

Dark Matter is terrific….(a) wild beast that grabs you by the neck (THE TIMES)

The very best ghost stories usually concern the predicaments of the living rather than the return of the dead. It’s a point appreciated by Michelle Paver, whose haunting new novella so cleverly illustrates how it is fear, rather than death, which is the great leveller (THE LADY)

Neither (Susan) Hill nor Paver allows any doubt. Their ghosts seem real enough. Paver’s is, I think, the more disturbing her vision of an eternally dark world of snow and fear, the more convincing her pattern of mood and suggestion, the more satisfying (GLASGOW SUNDAY HERALD)

Disquieting and poignant in equal measure, Paver’s novel reminds us that fear of the dark is the oldest fear of all. An ideal read for long winter evenings (IRISH EXAMINER)

More than just a ghost story, this is an exquisitely told psychological thriller. Unputdownable! (WOMAN’S WEEKLY)

Ghost stories don’t frighten me much, but this one did. Quite a lot, actually … Chilling in every respect.

Dark Matter builds suspense brilliantly … As well as a ghost story, it’s a great portrayal of Svalbard and the experience of spending a winter in the Arctic (ADVENTURE TRAVEL)

A chilling period piece, Dark Matter, cunningly illustrates how fear, rather than death, is the great equalizer. (INDEPENDENT)

More than just a ghost story, this is an exquisitely told psychological thriller. Unputdownable! (WOMANS WEEKLY)

A genuinely terrifying tale … I cannot recommend this novel enough, especially in these dark nights; you will certainly get more than you bargained for. I did. (SAVIDGE READS Book Blog)

Ghost stories don’t frighten me much, but this one did. Quite a lot, actually … Chilling in every respect.

Dark Matter builds suspense brilliantly … As well as a ghost story, it’s a great portrayal of Svalbard and the experience of spending a winter in the Arctic. (ADVENTURE TRAVEL)

Michelle Paver, who was born in Malawi to a Belgian mother and a father who operated the little “NYASALAND TIMES,” relocated to the UK when she was three years old. She grew up in Wimbledon and became a partner in a large City law firm after earning a biochemistry degree from Oxford. She left the city to pursue her long-held ambition of becoming a writer. The Chronicles of Ancient Darkness is her brilliantly popular children’s series. Her first adult ghost story is Dark Matter. Her lifelong fascination with the Arctic has taken her to northern Canada, Greenland, Scandinavia, and Spitsbergen.