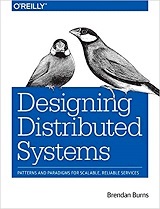 With no established design patterns to guide them, developers had to build distributed systems from scratch, and most of these systems are truly unique. Today, the increasing use of containers has paved the way for mainstream distributed system models and reusable container components.

System engineers and application developers will learn how these age-old patterns provide a common language and framework to dramatically increase the quality of your system.

Brendan Burns, Microsoft Distinguished Engineer and Director of Engineering for Microsoft Azure, works on Azure and is co-founder of the Kubernetes project.