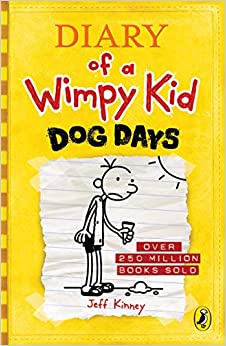 Diary of a Wimpy Kid: Dog Days By Jeff Kinney

‘Dog Days’ is the fourth book in the bestseller series ‘Diary of a Wimpy Kid’. This book starts with Greg talking about being an indoor person and how he wants to spend his summer inside his home, playing video games and doing his favourite activities. His plans come to a standstill when his mom announces that they are going to spend the summer outdoors, bonding as a family. Greg has to take the trip with his family. Another major event in his life this summer is the addition of a new member in his family: a new dog. Greg’s summer experience with the dog forms the main crux of this engrossing book. This book and the entire series is a collection of diary entries. The book is in first person narrative giving us an entry in the perspective of a child. It allows readers to see a side of the kids that we rarely know. An introvert child whose peace and alone time is interrupted time and again by his family reveals himself completely through diary entries. The series is a favourite among the kids worldwide. The clash between the perspectives of a child and his parents is playfully depicted through this book. Every kid between the ages of 8-12 should give it a read. How a new addition brings changes in a family and will Greg be able to enjoy his summers like he wants? Read this book and find answers to all the questions.