Diseases of Fruits and Vegetables Diagnosis And Management, Volume II by S.A.M.H. Naqvi :: Among the Horticultural Crops, Fruits and Vegetables (FV) are of primary importanceas the key source of essential components in an adequate and balanced human diet. FV have supported largely the daily food requirement of mankind since ages and even before man learned to grow cereal crops systematically. Over the years, growing FV has been the mainstay of rural economy and has emerged as an indispensable part of agriculture world over, offering farmers a wide range of crops in varied topography and climate. In certain parts of the world, FV are the major dietary staple. Apart from being a rich source of vitamins and minerals, this sector also contributes significantly in economy of the region or the nation. The increased income from per unit area of FV is far ahead and can not be compared with that of cereal crops. A recent survey by the Economist revealed that the world population has increased by 90 % in the past 40 years while food production has increased only by 25 % per head. With an additional 1.5 billion mouth to feed by 2020, farmers worldwide have to produce 39 % more. Looking at the load of the future food requirement, the global increased production of FV during last few years has absorbed the additional food requirement and accordingly the eating habits are also changing and shifting towards more consumption of these commodities worldwide. During 2002, world fruit production excluding melons was recorded 471.377 million metric tons and that of vegetables including melons 772.71 million metric tons and thus a total world production of FV to the tune of 1244.377 million tones has substantially absorbed the additional food requirement needed for the increasing population (FAOSTAT ,2002). 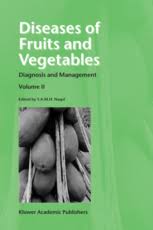 Diseases of Fruits and Vegetables Diagnosis And Management, Volume II by S.A.M.H. Naqvi

Title: Diseases of Fruits and Vegetables Diagnosis And Management