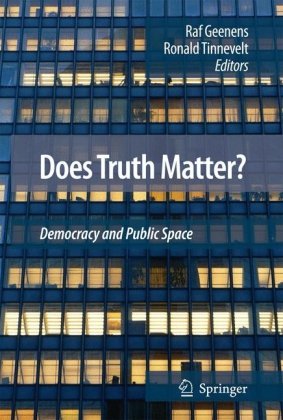 The claim once made by philosophers of unique knowledge of the essence of humanity and society has fallen into disrepute. Neither Platonic forms, divine revelation, nor metaphysical truth can serve as the ground for legitimating social and political norms. On the political level, many agree that democracy doesn’t need foundations. Nor are its citizens expected to discuss the worth of their comprehensive conceptions of the good life. According to Rawls, for example, we have to accept that “politics in a democratic society can never be guided by what we see as the whole truth.” (1993: 243) And yet we still call upon the truth when we define the basic structure of our society and argue why our opinions, beliefs, and preferences must be taken seriously. We do not think that our views need to be considered by others because they are our views but because we believe they are true. If in a democratic society, citizens have to deal with the challenge of affirming their claims as true, we need to analyze the precise relationship between truth and democracy. Does truth matter to democracy, and if so, what is the place of truth in democratic politics? How can citizens affirm the reality of their claims while also accepting that their truth is only one among many? Our book centers on the role of the public sphere in these pressing questions. It tries to comprehensively answer these questions from the perspective of the three main approaches of contemporary democratic theory: deliberative democracy, political pragmatism, and liberalism. A confrontation of these approaches will result in a more comprehensive philosophical understanding of our plural democracy, which is more complex than ever in this age of globalization.

A good understanding of the public sphere’s function, meaning, and shortcomings are essential to answering these questions, so a good deal of the book addresses these issues. Historically, the idea that citizens have to engage each other in discussion to determine the structure and goals of society is connected to the rational ideal of a public sphere where conflicting views can be expressed, formed, and transformed. But hasn’t the collective decision-making in which everyone participates on an equal footing turned out to be a deceptive ideal or a simple illusion? Not every individual in society has equal access to the podium. Furthermore, power, an inevitable feature of the public sphere, seems to endanger its democratic value permanently.

Moreover, this sphere depends on a specific ethos and public spaces where citizens are called upon to present themselves as citizens, as people taking responsibility for their society. It is unclear whether this ethos and these spaces exist, and if so if they have preserved their ascribed capacity for constituting “democratic” truth. We expect to deepen our understanding of the relationship between reality and democracy by answering these questions.