Home General Subjects Books Chemistry Books Early Responses to the Periodic System by Kaji, Kragh, and Palló
Early Responses to the Periodic System by Kaji, Kragh, and Palló : Content: 2.6 After the Priority Dispute—M eyer and the German : Chemical Community : The priority dispute took place in the Berichte der Deutschen Chemischen Gesellschaft and could be easily read by the chemical community, which at the time was dominated by organic chemists. How did the chemical community respond to the priority dispute? At first, no other papers could be found that explicitly discussed the priority dispute. It cannot be excluded that the correspondences reflected the dispute. But it is obvious that the authors who dealt directly or indirectly with the questions of atomism, elements, and their classification or the determination of atomic weights often mentioned the successful predictions of Mendeleev and showed some reticence concerning Meyer’s work. It seems that the success of (some) predictions of new elements influenced the process of forgetting about Meyer’s precautionary contribution and overemphasizing the role of the predictions in the process of acceptance. Several examples can be given to underline and explain these facts. The following paragraphs focus on Meyer’s standing in the physicochemical community. Meyer was a representative of physical chemistry, a specialization that, because of the efforts of Wilhelm Ostwald (1853–1932), started its institutionalization as a discipline, but did not play a dominant role in the chemical community then. Among physical chemists there was a type of “trench warfare” going on over the existence of atoms and the theory of solutions. There were several conflicts between Meyer and Ostwald. Meyer had reservations about the theory of dissociation and the establishment of the Zeitschrift für physikalische Chemie [Journal of Physical Chemistry], and later about the theory on osmotic pressure. Ostwald wrote to Svante Arrhenius (1859–1927) saying that, “Lothar wrote a very foolish article on osmotic pressure.”44 Meyer warned Ostwald on several occasions against being too critical in his journal. The repeated differences of opinion intensified with time. Meyer and Seubert’s book from 1883, Die Atomgewichte der Elemente aus den Originalzahlen neu berechnet [The Atomic Weights of the Elements Newly Calculated from the Original Numbers], was based on the ratio of atomic weights H:O=1:15,96. This was also a moot point.
Download to Read More…. 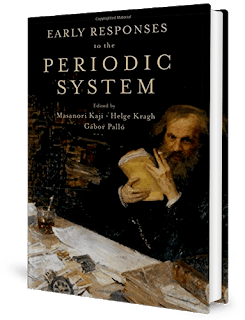 The reception of the periodic system of elements has received little attention among scientists and historians alike. While many historians have studied Mendeleev’s discovery of the periodic system, few have analyzed the ways in which the scientific community perceived and employed it. American historian of science Stephen G. Brush concluded that the periodic law had been generally accepted in the United States and Britain, and has suggested the need to extend this study to other countries.

In Early Responses to the Periodic System, renowned historians of science Masanori Kaji, Helge Kragh, and Gábor Palló present the first major comparative analysis on the reception, response, and appropriation of the periodic system of elements among different nation-states. This book examines the history of its pedagogy and popularization in scientific communities, educational sectors, and popular culture from the 1970s to the 1920s. Fifteen notable historians of science explore the impact of Mendeleev’s discovery in eleven countries (and one region) central to chemical research, including Russia, Germany, the Czech lands, and Japan, one of the few nation-states outside the Western world to participate in the nineteenth-century scientific research.

The collection, organized by nation-state, explores how local actors regarded the new discovery as law, classification, or theoretical interpretation. In addition to discussing the appropriation of the periodic system, the book examines meta-physical reflections of nature based on the periodic system outside the field of chemistry, and considers how far humans can push the categories of “response” and “reception.” Early Responses to the Periodic System provides a compelling read for anyone with an interest in the history of chemistry and the Periodic Table of Elements.

Early Responses to the Periodic System

[PDF] Early Responses to the Periodic System by Kaji, Kragh, and Palló Table Of Contents

Introduction —
The early response to Mendeleev’s Periodic System in Russia / Masanori Kaji and Nathan Brooks —
The periodic system and its influence on research and education in Germany between 1870 and 1910 / Gisela Boeck —
British reception of periodicity / Gordon Woods —
Mendeleev’s periodic classification and law in French chemistry textbooks / Bernadette Bensaude Vincent and Antonio Garcia Belmar —
Nationalism and the process of reception and appropriation of the Periodic System in Europe and the Czech Lands / Soňa Štrbáňová —
When a daring chemistry meets a boring chemistry : the reception of Mendeleev’s Periodic System in Sweden / Anders Lundgren —
Reception and early use of the periodic system : the case of Denmark / Helge Kragh —
Ignored, disregarded, discarded? On the introduction of the Periodic System in Norwegian periodicals and textbooks, c. 1870-1930s / Annette Lykknes —
Chemical classifications, textbooks, and the periodic system in nineteenth-century Spain / José Ramón Bertomeu-Sánchez and Rosa Muñoz-Bello —
Echoes from the reception of periodic classification in Portugal / Isabel Malaquias —
Popular science, textbooks, and scientists : the periodic law in Italy / Marco Ciardi and Marco Taddia —
Chemical classification and the response to the periodic law of elements in Japan in the nineteenth and early twentieth centuries / Masanori Kaji.