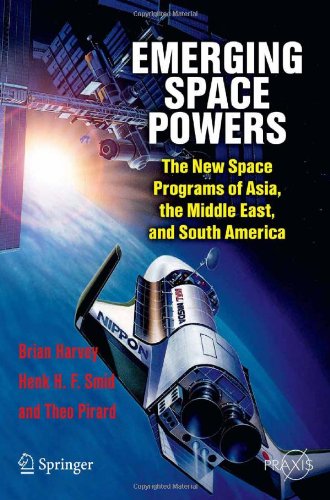 This work introduces the crucial emerging space powers of the world. Brian Harvey describes the origins of the Japanese space program, from rocket designs based on WW II German U-boats to tiny solid fuel ‘pencil’ rockets, which led to the launch of the first Japanese satellite in 1970. The following two chapters relate how Japan expanded its space program, developing small satellites into astronomical observatories and sending missions to the Moon, Mars, comet Halley, and asteroids. Chapter 4 describes how India’s Vikram Sarabhai developed a sounding rocket program in the 1960s. The following chapter describes the expansion of the Indian space program. Chapter 6 relates how the Indian space program is looking ahead to the success of the moon probe Chandrayan, due to launch in 2008, and its first manned launching in 2014. Chapters 7, 8, and 9 demonstrate how, in Iran, communications and remote sensing drive space technology. Chapter 10 outlines Brazil’s road to space, beginning in the mid-1960s with the launch of the Sonda-sounding rockets. The following two chapters describe Brazil’s satellite and space launch systems and plans for the future. Chapters 13 and 14 studies Israel’s space industry. The following chapters look at the burgeoning space programs of North and South Korea. The book ends by contrasting and comparing all the space programs and speculating how they may evolve in the future. An appendix lists all launches and launches attempts to date of the emerging space powers.