Home A Special Books Frida: A Biography of Frida Kahlo 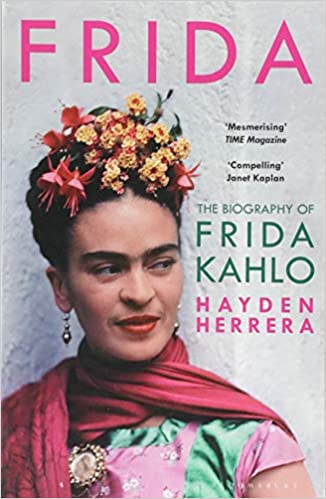 Frida: A Biography of Frida Kahlo By Hayden Herrera

Frida: A Biography of Frida Kahlo is a 1983 book by Hayden Herrera about the life of Mexican artist Frida Kahlo, her art, and her relationship with muralist Diego Rivera. A major 2002 studio film, Frida, adapted from the book, stars Salma Hayek as Kahlo.

A reissue of the beautifully illustrated and authoritative biography of Frida Kahlo, publishing in time for a major London exhibition Frida is the story of one of the twentieth century’s most extraordinary women, the painter Frida Kahlo. Born near Mexico City, she grew up during the turbulent days of the Mexican Revolution and, at eighteen, was the victim of an accident that left her crippled and unable to bear children. To salvage what she could from her unhappy situation, Kahlo had to learn to keep still so she began to paint. Kahlo’s unique talent was to make her one of the century’s most enduring artists. But her remarkable paintings were only one element of a rich and dramatic life. Frida is also the story of her tempestuous marriage to the muralist Diego Rivera, her love affairs with numerous, diverse men such as Isamu Noguchi and Leon Trotsky, her involvement with the Communist Party, her absorption in Mexican folklore and culture, and of the inspiration behind her unforgettable art.

Frida Kahlo was born in 1907 to parents of German and Spanish descent, in Coyoacan, outside Mexico City. After contracting polio at age six, Frida also suffered severe injuries in a bus accident. Her time spent in recovery turned her toward a painting career. These experiences, combined with a difficult marriage to the artist Diego Rivera, generated vibrant works depicting Frida’s experiences with pain as well as the symbolism and spirit of Mexican culture. Though she died in 1954, interest in her work continues to grow, with museum exhibitions and publications around the world. This biography will introduce art students and adult readers to one of the Latino culture’s most beloved artists.In 2002, the film Frida introduced the artist and her works to a new audience. In 2007, the 100th anniversary of Kahlo’s birth, a major exhibition of her work was held at the Museum of the Fine Arts Palace in Mexico. In 2007 through 2008, another major exhibition began its journey to museums throughout the United States.