Home General Subjects Books Chemistry Books General Chemistry, 4th Edition by Donald A McQuarrie
General Chemistry, 4th Edition by Donald A McQuarrie :: The last edition of McQuarrie and Rock came out in 1991. Over the years it has been gratifying to be told by so many people how much they regretted not  seeing a fourth edition. It is a great pleasure to have the opportunity to present this new edition, especially with the new perspective of having been away from it for almost twenty years.
Unlike many subsequent textbook editions, we have made a number of significant changes. Perhaps the most significant of these is that we are using the “atoms first” approach, which has made such inroads into the general chemistry curriculum since the third edition. After an introductory chapter on “Chemistry and the Scientific Method,” we go on to discuss elements, compounds, and chemical nomenclature along with a brief introduction to atoms, molecules, and the nuclear model of the atom. In Chapter 3 we emphasize the periodic properties of the elements by way of a few selected chemical reactions of the various groups of elements. Having introduced the periodic table, probably the most important topic in general chemistry, we then have six chapters where we use the quantum theory to present the underlying explanation of the periodic properties of the elements. The first of these six chapters, Chapter 4, discusses atomic spectra and the concept of the quantization of energy levels. Then in Chapter 5 we discuss multielectron atoms and show the connection between the electron configurations of multielectron atoms and chemical periodicity. Chapter 6 discusses ionic bonds, the simplest type of bonding. After a rather thorough discussion of Lewis formulas in Chapter 7, we go on to use Lewis formulas to predict molecular geometries using VSEPR theory in Chapter 8. This introduces the students to a great variety of molecules and compounds and gives more practice writing Lewis formulas. In Chapter 9, the last of the six consecutive chapters on quantum theory and atomic and molecular structure, we present a fairly detailed introduction to covalent bonding, using simple molecular orbital theory for diatomic molecules and hybrid orbitals to describe the bonding in polyatomic molecules. 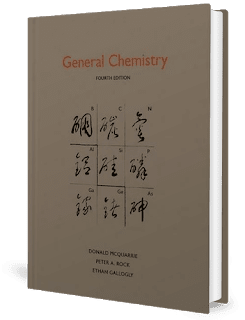