Genome The Autobiography of a Species in 23 Chapters – Matt Ridley :: Genome offers extraordinary insight into the ramifications of this incredible breakthrough. By picking one newly discovered gene from each pair of chromosomes and telling its story, Matt Ridley recounts the history of our species and its ancestors from the dawn of life to the brink of future medicine. From Huntington’s disease to cancer, from the applications of gene therapy to the horrors of eugenics, Matt Ridley probes the scientific, philosophical, and moral issues arising as a result of the mapping of the genome. It will help you understand what this scientific milestone means for you, for your children, and for humankind.

Genome The Autobiography of a Species in 23 Chapters – Matt Ridley 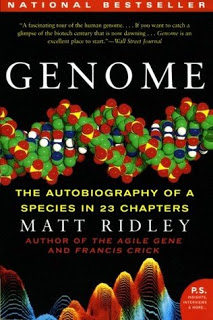 The human genome, the complete set of genes housed in twenty-three pairs of chromosomes, is nothing less than an autobiography of our species. Spelled out in a billion three-letter words using the four-letter alphabet of DNA, the genome has been edited, abridged, altered and added to as it has been handed down, generation to generation, over more than three billion years. With the first draft of the human genome due to be published in 2000, we, this lucky generation, are the first beings who are able to read this extraordinary book and to gain hitherto unimaginable insights into what it means to be alive, to be human, to be conscious or to be ill.

By picking one newly discovered gene from each of the twenty-three human chromosomes and telling its story, Matt Ridley recounts the history of our species and its ancestors from the dawn of life to the brink of future medicine. He finds genes that we share with bacteria, genes that distinguish us from chimpanzees, genes that can condemn us to cruel diseases, genes that may influence our intelligence, genes that enable us to use grammatical language, genes that guide the development of our bodies and our brains, genes that allow us to remember, genes that exhibit the strange alchemy of nature and nurture, genes that parasitise us for their own selfish ends, genes that battle with one another and genes that record the history of human migrations. From Huntington’s disease to cancer, he explores the applications of genetics: the search for understanding and therapy, the horrors of eugenics and the philosophical implications for understanding the paradox of free will.

Amazon.com Review Science writer Matt Ridley has found a way to tell someone else’s story without being accused of plagiarism. Genome: The Autobiography of a Species in 23 Chapters delves deep within your body (and, to be fair, Ridley’s too) looking for dirt dug up by the Human Genome Project. Each chapter pries one gene out of its chromosome and focuses on its role in our development and adult life, but also goes further, exploring the implications of genetic research and our quickly changing social attitudes toward this information. Genome shies away from the “tedious biochemical middle managers” that only a nerd could love and instead goes for the A-material: genes associated with cancer, intelligence, sex (of course), and more.

Readers unfamiliar with the jargon of genetic research needn’t fear; Ridley provides a quick, clear guide to the few words and concepts he must use to translate hard science into English. His writing is informal, relaxed, and playful, guiding the reader so effortlessly through our 23 chromosomes that by the end we wish we had more. He believes that the Human Genome Project will be as world-changing as the splitting of the atom; if so, he is helping us prepare for exciting times–the hope of a cure for cancer contrasts starkly with the horrors of newly empowered eugenicists. Anyone interested in the future of the body should get a head start with the clever, engrossing Genome. –Rob Lightner

The genome’s been mapped.
But what does it mean?
Arguably the most significant scientific discovery of the new century, the mapping of the twenty-three pairs of chromosomes that make up the human genome raises almost as many questions as it answers. Questions that will profoundly impact the way we think about disease, about longevity, and about free will. Questions that will affect the rest of your life.

Genome The Autobiography of a Species in 23 Chapters PDF